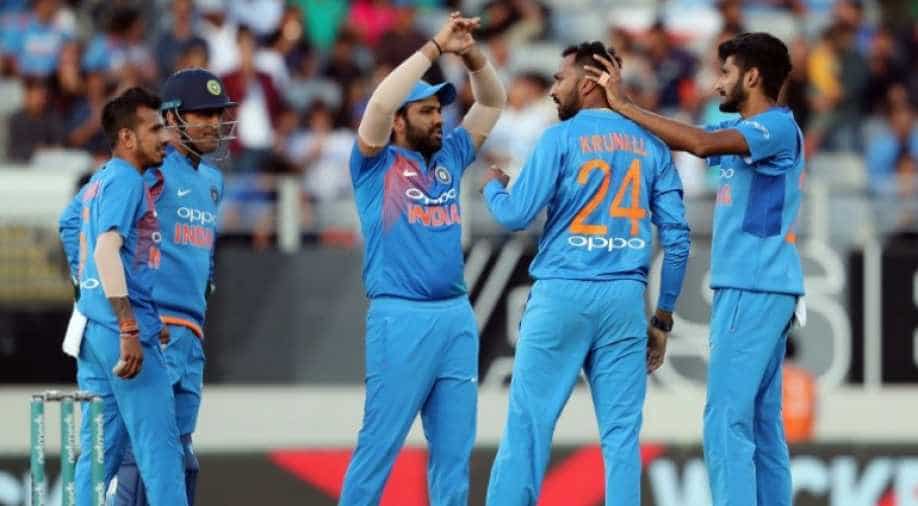 Krunal Pandya was given the man of the match award for his crucial contribution.

India defeated New Zealand by seven wickets in the second Twenty20 international at Auckland's Eden Park on Friday to level the series at 1-1.

New Zealand set India a modest total of 159 and the tourists overhauled it in 18.5 overs, finishing at 162 for three as captain Rohit Sharma top-scored on 50.

Sharma has become the highest run scorer in the T20I history and also became first India and the third overall player to smash 100 sixes in T20 cricket.

Earlier, Krunal Pandya struck thrice that helped India to restrict the hosts at a competitive total.

Krunal's 3/28 in 4 overs earned him player of the match award. He dismissed Colin Munro (12) and skipper Kane Williamson (20) to peg the Black Caps back.

In between, Krunal also got the controversial wicket of Daryl Mitchell (1), who fell prey to an umpiring howler, when 'Hotspot' showed a clear inside edge onto the pads.

However, Colin de Grandhomme then counter-attacked, scoring a blistering 50 off 28 balls, adding 77 runs with Ross Taylor (42 off 36 balls) for the fifth wicket.

Once De Grandhomme was sent back to the dug-out by Hardik Pandya (1/36 in 4 overs) and Taylor was run-out, New Zealand's chances of a big total went up in smoke.

It was a much-improved performance by the Indian bowlers with Bhuvneshwar Kumar (1/29 in 4 overs) removing Tim Seifert (12) in the very third over with a fuller delivery, inducing an inside edge to Mahendra Singh Dhoni behind the stumps.

At 50 for 4, it was De Grandhomme, who took charge as he attacked Yuzvendra Chahal (0/37 in 4 overs), hitting him for a couple of sixes.

When he was just about threatening to take the game away, De Grandhomme smacked one straight to covers in skipper Rohit's hands.

India bowled 35 dot balls, which could well be decisive in the final context of the match.