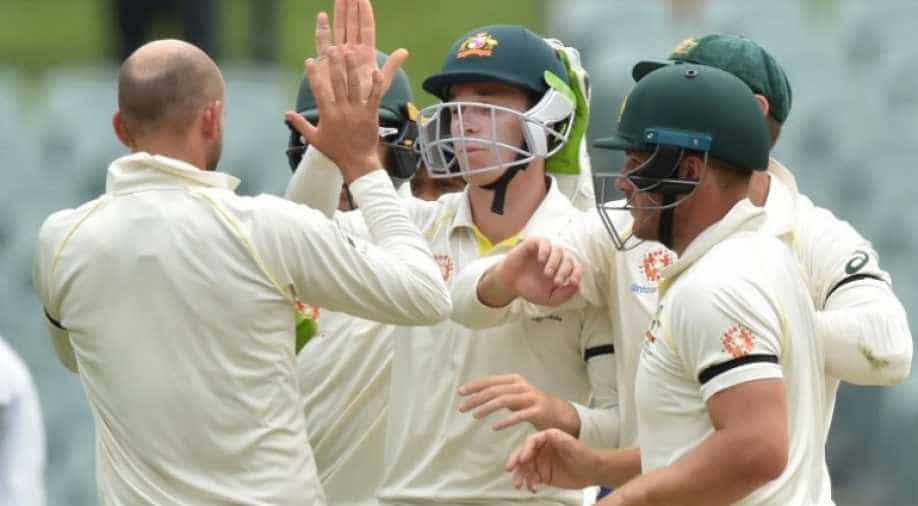 Spinner Nathan Lyon finished with six wickets as India's batsmen collapsed for the addition of only 47 runs after lunch.

India set Australia a 323-run target to win the series-opening Test after being bowled out for 307 in their second innings after lunch on the fourth day.

Spinner Nathan Lyon finished with six wickets as India's batsmen collapsed for the addition of only 47 runs after lunch, having resumed on 260 for five on a warm, cloudy day at Adelaide Oval.

Paceman Mitchell Starc took three wickets, with Cheteshwar Pujara top-scoring with 71 for the touring side.

The highest successful fourth-innings chase at Adelaide Oval was the 315 scored by the hosts against England in 1902.

A brilliant six-wicket haul from Nathan Lyon helps Australia bowl India out for 307 in Adelaide.

Spinner Nathan Lyon made difference on the fourth day but still, Australia have a mountain to climb for an unlikely win.

Three late wickets in the space of seven balls got the crowd on their feet and gave Australia hope of victory, but they will need to make history to win.

The only successful fourth innings Test run chase of more than 300 at Adelaide came in 1902, when the hosts made 315 to beat England.

The biggest on the ground in modern times was 239 in 1982, when the West Indies managed the feat.

A sliver of hope will come from Western Australia in a domestic match last month hitting 313 to beat South Australia here with Shaun Marsh -- who is playing in the Test -- scoring 163 not out.