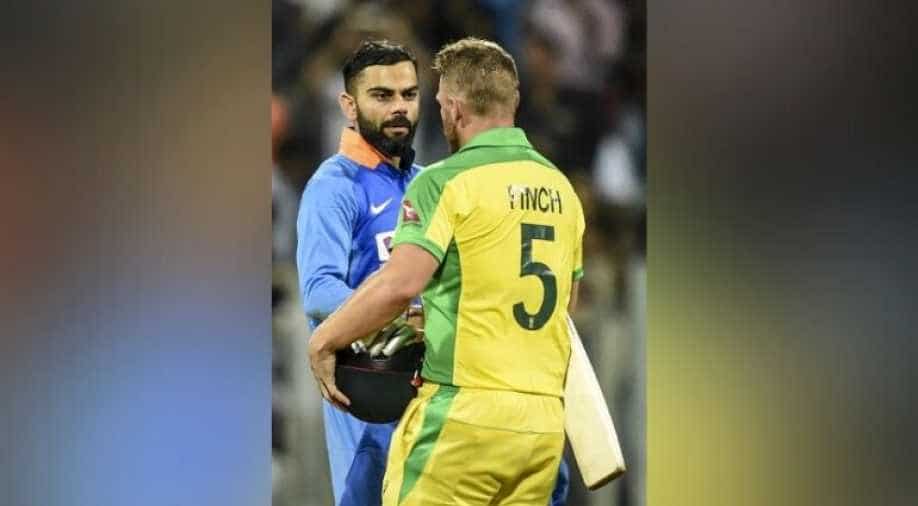 India's Virat Kohli (L) greets Australia's Aaron Finch after the Australian team won the first one day international (ODI) cricket match of a three-match series between India and Australia at the Wankhede Stadium in Mumbai on January 14, 2020. Photograph:( AFP )

It is a do-or-die fixture for India to save themselves from a second consecutive series defeat against Australia in India.

Virat Kohli and Co are set to face the Aussies for the second One Day international in Saurashtra Cricket Association, Rajkot. It is a do-or-die fixture for India to save themselves from a second consecutive series defeat against Australia in India.

After a thumping win over India by 10 wickets in the first ODI, Australia will be eyeing to clinch the series against the men in blue.

In a pre-match press conference, Shreyas Iyer assured that India would come back strong in the series.
"We have not lost the series and we can still come back strong and that's what we have discussed in the dressing room after the game. We need to back ourselves and believe in ourselves," he said.

Going BANG 💥💢 at the nets ahead of the 2nd ODI in Rajkot #TeamIndia #INDvAUS @Paytm pic.twitter.com/7y9NCBc7bv

Earlier, Virat Kolhi said that he was open to experiments in the batting order, and Shreyas Iyer came in to bat at No 3. The decision massively backfired as both Shreyas and Virat were out cheap.

The Indian skipper is likely to return to his original position (No 3) to face the mighty Australia.

Mitchell Starc's bowling was lethal in the previous match. Indian batsmen were seen getting prepared in nets by replicating Starc's pace and angles with the throw-downs.

Whereas, Australia's most lethal batsmen Marnus Labushchagne has not yet come to down to bat against India.

Rajkot's pitch is favourable to batsmen and the match is predicted to be a high scoring match.

Yuzvendra Chahal is likely to replace Kuldeep Yadav, as Ravindra Jadeja's place is safe because the match is being held on his home ground. Rishabh Pant is pout of the match after the concussion, he might get replaced by either Kadhar Jadhav or Manish Pandey.
KL Rahul is likely to don the wicket keeping gloves.

Australia will probably go unchanged after the victory in Wankhede, they are expected to play with the same XI.