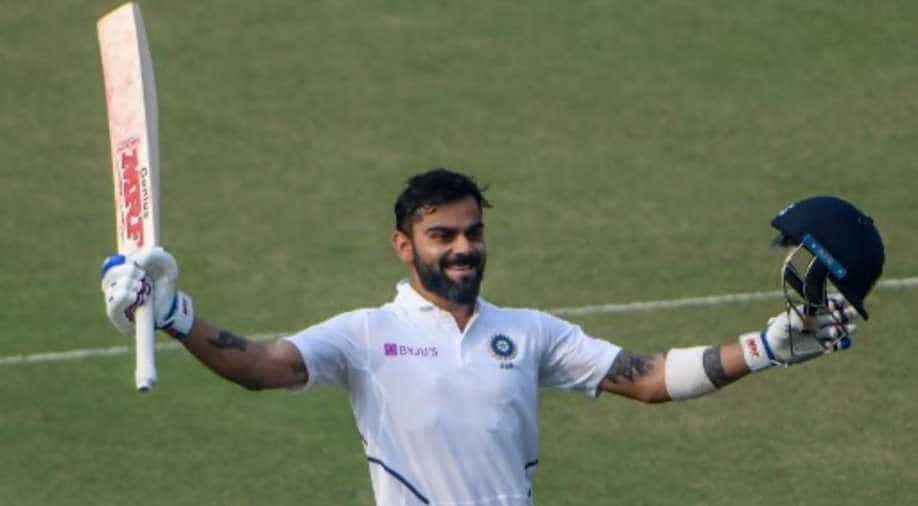 India relied on a key 58-run sixth-wicket stand between Kohli and Ravindra Jadeja, unbeaten on 39 off 31 balls, to achieve their target with eight balls to spare in Cuttack.

Skipper Virat Kohli smashed 85 to help India pull off a nervous chase of 316 to win the third one-day international by four wickets against West Indies and clinch the series on Sunday.

India relied on a key 58-run sixth-wicket stand between Kohli and Ravindra Jadeja, unbeaten on 39 off 31 balls, to achieve their target with eight balls to spare in Cuttack.

Paceman Keemo Paul claimed three wickets, including that of Kohli in the 47th over, before Jadeja and Shardul Thakur, 17 not out, took the team home and to a 2-1 series win.

"Having done it so many times, you obviously have a bit more calmness and you understand how the dew is playing and all you need is a short partnership," said Kohli, who was named man of the match.

"It was outstanding to see others finishing the game. I had a nervous look when I walked back, but when I watched 'Jaddu' (Jadeja) he looked very confident."

Rohit Sharma, who made 63, and KL Rahul, on 77, laid the foundation of the team's chase with an opening partnership of 122 after the West Indies posted 315 for five.

West Indies skipper Kieron Pollard and Nicholas Pooran put together 135 runs for the fifth wicket to lift their side from 144 for four to a fighting total.

Pollard remained unbeaten on 74 off 51 deliveries after Pooran hit an attacking 89 to pulverise the Indian bowling in the last 10 overs that produced 118 runs for the West Indies.

In response, Kohli, who made India bowl first after winning the toss, batted with conviction despite wickets falling from the other end to make the second-ranked ODI side finish the year on a high.

Jason Holder got Sharma caught behind and Alzarri Joseph sent Rahul trudging back to the pavilion after his second successive score of 50 plus. He made 102 in India's series-levelling second ODI.

But Kohli kept up the attack during his 81-ball knock despite wickets falling at the other end before chopping a wide delivery on the offside onto his stumps.

Thakur then hit two fours and a six in his six-ball cameo to bring the packed house back to life as he celebrated the win with Jadeja.

Sharma, who ended the year as the top ODI batsman with 1,490 runs in 28 matches, was named man of the series for his 258 runs including a knock of 159 in the second ODI.

The 27-year-old Saini got his maiden ODI wicket after sending the dangerous Shimron Hetmyer back to the pavilion for 37.

Hetmyer's wicket ended a 62-run third-wicket stand with Roston Chase who was bowled by a toe-crushing yorker from Saini for 38.

But Pooran counter-attacked and completed his second successive fifty with a six off left-arm wrist-spinner Kuldeep Yadav, who went wicketless after coming into the game with 99 scalps.

He hit 10 fours and three sixes in his knock that lasted 64 balls before falling to Thakur with a mistimed hit to deep point.

"I don't think there's much to be disappointed about. Obviously results matter but if you look at where we are from where we've come from, I can't fault the boys, they showed their mettle," said Pollard.

Pant dropped three catches to give Chase (on nought), Hetmyer (on nine) and Pooran (on 52) extended stays at the wicket.

India will next host Sri Lanka for a three-match Twenty20 series starting January 5.