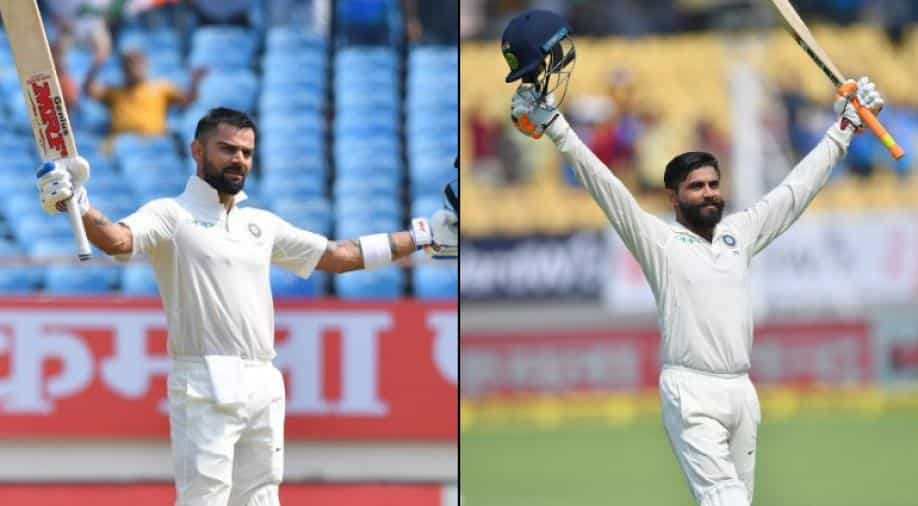 West Indies were 94 for six at stumps, trailing India by 555 runs.

India's skipper Virat Kohli and all-rounder Ravindra Jadeja slammed centuries in the first innings of the opening Test against West Indies on Friday at Rajkot.

Virat became the quickest batsman to reach 24 Test centuries after the great Donald Bradman. He reached his 24th century in his 123rd innings, while Australia's Bradman took just 66 knocks to achieve the same feat.

Kohli also surpassed Australia's Steve Smith to go second in the list of centurions among active players, behind South Africa's Hashim Amla on 28.

Apart from Kohli, all-rounder Jadeja struck an unbeaten 100 off 132, that included five fours and five sixes, in front of home crowd.

That's stumps on day two in Rajkot and India are in full charge.

Two wickets for Shami and one each from Ashwin, Jadeja and Kuldeep Yadav plus a run-out has Windies in trouble on 94/6, trailing by 555 runs.#INDvWI scorecard ➡️ https://t.co/bOSqMElBuo pic.twitter.com/3aQQI17bcX

#TeamIndia in full control of this Test match as West Indies finish on 94/6 at Stumps on Day 2.

Windies trail by 555 runs with 4 wickets remaining in the innings.

Jadeja had to wait till his 38th Test to reach three figures, having made his debut back in December 2012.

With the help of two centuries and Rishabh Pant's blistering 92-run knock, India dominated on the second day as they declared the innings after pilling up 649 runs.

In response to that, West Indies were 94 for six at stumps, trailing India by 555 runs.

Roston Chase, on 27, and Keemo Paul, on 13, were batting at the close of play against a persistent Indian bowling attack.