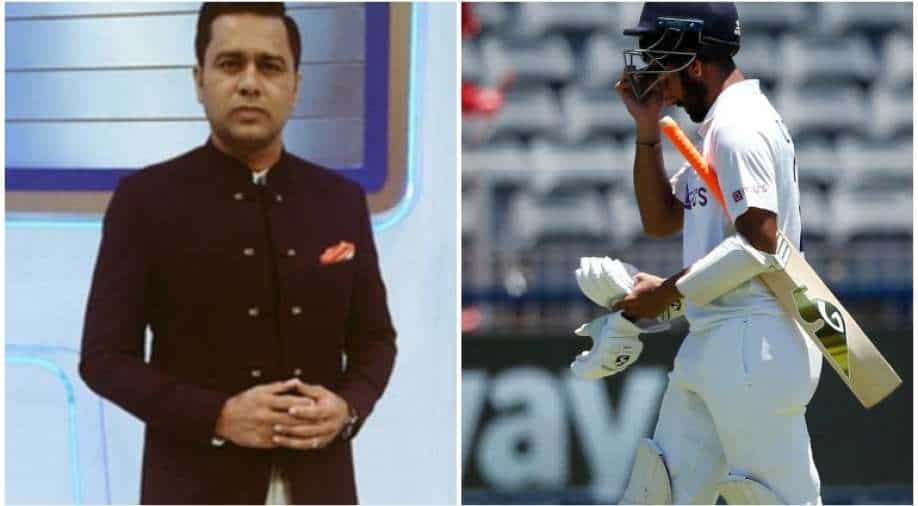 India vs SA, 2nd Test: Former Indian opener-turned-commentator Aakash Chopra pointed out the 'uncanny pattern' to Cheteshwar Pujara's dismissals after the No. 3 batter fell for 3 on Day 1 in Johannesburg.

Cheteshwar Pujara's woeful run with the bat continued on Day 1 of the second and penultimate Test between India and South Africa on Monday (January 3). After stand-in captain KL Rahul won the toss and opted to bat first, India started off decently to reach 36 for no loss before they were quickly reduced to 49-3 in no time.

After Mayank Agarwal (26) was the first wicket to fall on the day, No. 3 batter Pujara was expected to grind it out in the middle with no Virat Kohli in the line-up, due to upper back spasm. However, nothing of that sort happened as the 33-year-old perished for cheap (3), falling to a well-executed short-pitched delivery from SA's pacer Duanne Olivier.

With another failure, Pujara is surely running against time to hold onto his Test spot. For the unversed, the right-hander's last triple-figure knock came in early 2019 versus Australia Down Under. Since then, he has had vital fifty-plus scores under his belt, however, the senior pro has failed to convert them. Moreover, Pujara has fallen to short-pitched balls or being beaten by the incoming deliveries.

ALSO READ | 'This is the type of person you want...': Ex-Pak skipper all praise for Rahul Dravid for backing Virat Kohli

Former Indian opener-turned-commentator Aakash Chopra decoded Pujara's failures in the lunch break and told on Star Sports, "He is not even hitting the half volley with full might and we can an uncanny pattern in his dismissals. He had nicked Ngidi's delivery in the first innings of the Centurion Test. If we look at his hands and the height of the delivery, why is he even trying to play off the front foot instead of using the depth of the crease."

To showcase Pujara's woes, he has now gone 45 innings without a century. Thus, former South Africa pacer Morne Morkel also spoke at length about the short ball ploy used against Pujara and said, "He needs to find a way to get off the strike in South Africa and have that intent to score. There is no better feeling bowler when you run in and know that the batter is not trying to take you on."

ALSO READ | Pujara and Rahane have just the next innings to save their Test careers, says Sunil Gavaskar as duo fail again

India are without regular captain Kohli in the second Test in Johannesburg. The visitors have lost more than half the side for 150 after opting to bat first. They will hope to post anything over 220 and then challenge the Dean Elgar-led Proteas with the red cherry in hand.