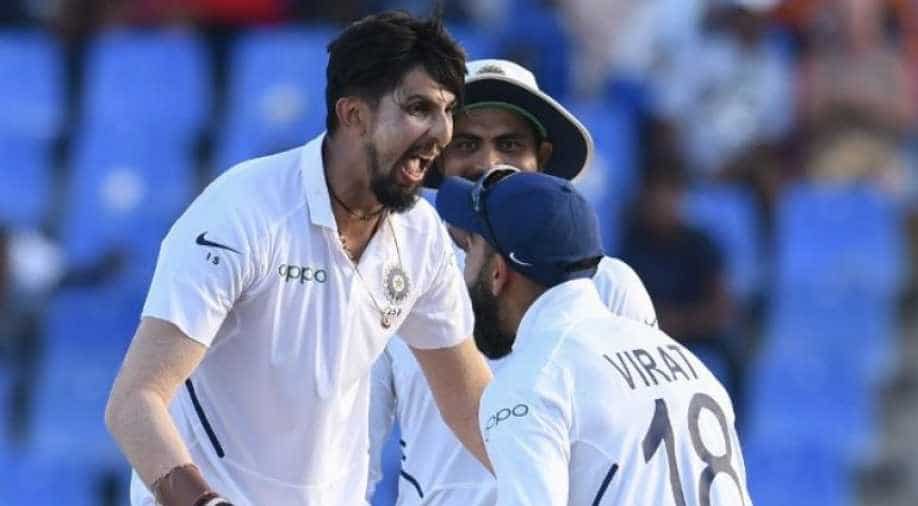 Ishant Sharma (L) and Virat Kohli (R) of India celebrates the dismissal of Kemar Roach of West Indies during day 2 of the 1st Test between West Indies and India. Photograph:( AFP )

The veteran pacer had earlier become the third Indian speedster to have scalped 300 wickets in the longest format of the game.

Senior speedster Ishant Sharma became the second Indian paceman after Kapil Dev to play in 100 Test matches on Wednesday. Sharma achieved this milestone after being named in the playing XI of the pink-ball Test at Narendra Modi Stadium.

The veteran pacer had earlier become the third Indian speedster to have scalped 300 wickets in the longest format of the game.

Joe Root won the toss and chose to bat first. "We are gonna bat first. Hopefully, we will get a big score like the first Test. Hoping the wicket will dry out as the game goes along," Root explained the reasons for his choice at the toss.

"It is certainly harder and seems to swing more compared to the red ball. We are very excited to be here 1-1 and are looking to do well. Four changes. Anderson, Archer, Bairstow, Crawley back in. Burns, Lawrence, Stone, Moeen Ali out," he added.