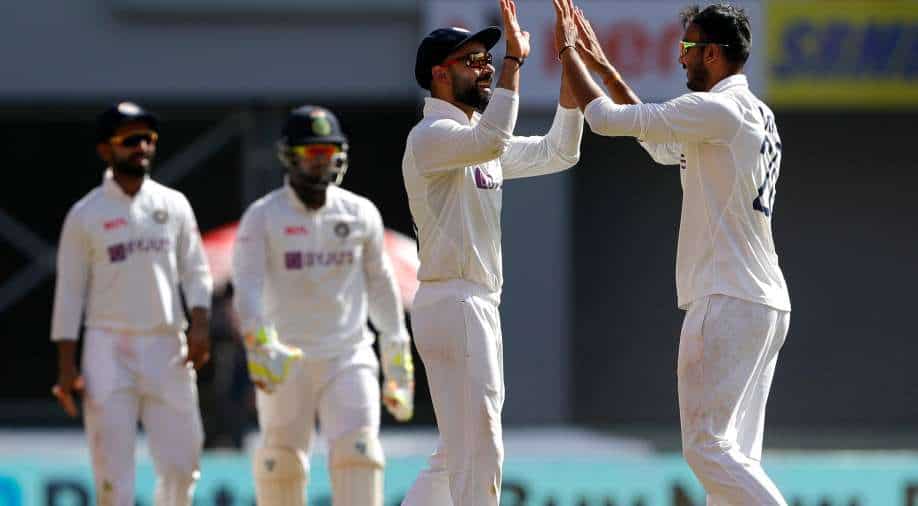 India ended day 1 of the fourth Test on top as hosts restricted England to 205 at the Narendra Modi Stadium on Thursday.

ALSO READ: WATCH: Virat Kohli and Ben Stokes get into an argument on Day 1 of 4th Test

England skipper Joe Root won the toss and decided to bat first. However, England's poor batting form continued as visitors were reduced to 30 for 3. Jonny Bairstow and Ben Stokes' 48-run stand tried to stabilise the England innings. However, England were bowled out for 205 runs.

IN PICS: From Garfield Sobers, Yuvraj Singh to Kieron Pollard: Men who blasted six sixes in an over in past 53 years

England all-rounder Ben Stokes top-scored with 55 and returning batsman Dan Lawrence made 46. The hosts were dismissed in the final session on Day 1.

India, in return, lost Shubman Gill on the very third ball as he failed to read Jimmy Anderson's delivery and getting a leg before wicket. Cheteshwar Pujara and Rohit Sharma stabilised the innings and India were 24/1 at the end of Day 1.

Virat's India are 2-1 up in the series and need atleast a draw to secure the slot in WTC finals.

'If we get COVID, so be it': Megan Schutt on Tahlia McGrath playing against India despite testing positive

Inspired by Japanese text, how a Czech football hooligan became a UFC champion