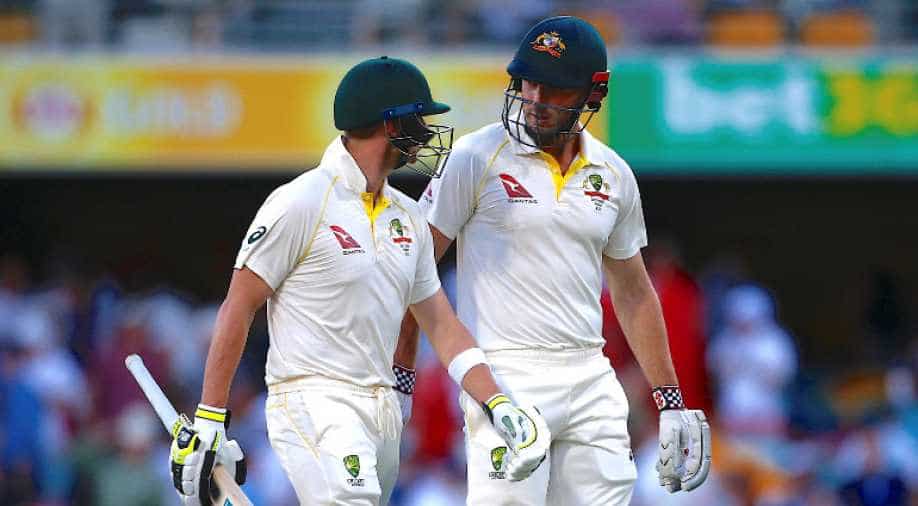 Australia's captain Steve Smith talks with Shaun Marsh as they walk off the field at the end of play on the second day of the first Ashes cricket test match on November 24th, 2017. Photograph:( Reuters )

However, Haddin feels that Marsh's time is done. “I think Shaun Marsh’s time is done,” Haddin said on Fox Cricket.

Injury-plagued Australia is finding a hard time to figure out their playing XI for their first Test against Team India. Hosts have already lost Will Pucovski, Marnus Harris and David Warner to injuries, however, former Aussie wicketkeeper-batsman Brad Haddin is convinced that veteran batsman Shaun Marsh is likely to not feature in team's future plans.

With multiple injuries, Media has been talking about the potential return of Shaun Marsh in the Test squad. However, Haddin feels that Marsh's time is done. “I think Shaun Marsh’s time is done,” Haddin said on Fox Cricket.

“The theatre around it sounds great. He has started the Sheffield Shield season in fine form, he’s played really well tonight but he’s 37 years of age. You’ve got to move on. Everyone wants him to play again for Australia because he is such a good person but I think we’ve got to look at someone else.”

Also read: Sunil Gavaskar picks this batsman who will bat at No.4 after Virat Kohli leaves

Brett Lee agreed with Brad Haddin and said that Marsh had his share of opportunities. “The hardest thing for me is when he is on, he is so good to watch,” Lee said. “He has had his opportunities; he has had his chances. It’s probably been injury that has let him down rather than form,” the former Australia quick said.