I personally requested Virat Kohli not to step down as India's T20 Captain: Sourav Ganguly 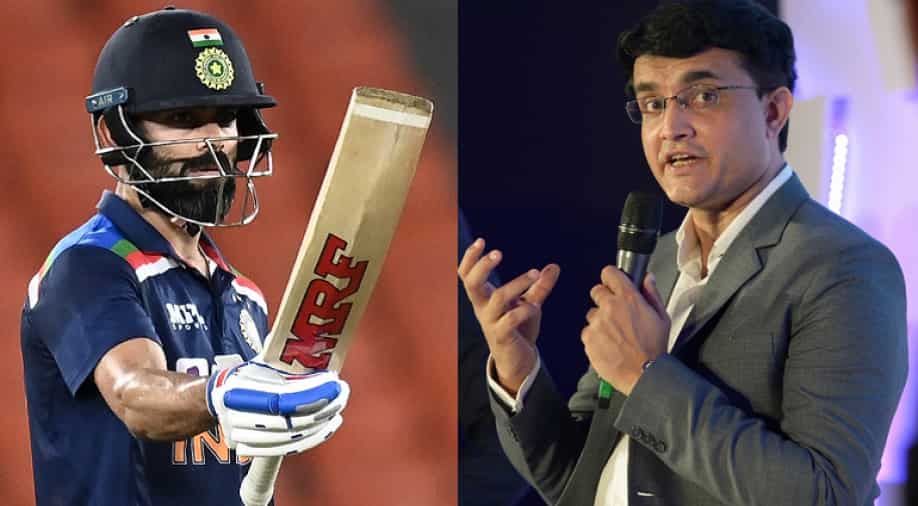 Sourav Ganguly revealed he had personally requested Virat Kohli to not give up T20 captaincy. Photograph:( AFP )

BCCI president Sourav Ganguly has revealed he personally requested Virat Kohli to not give up T20 captaincy but the latter decided to step down and had announced his decision in October this year.

The Board of Control for Cricket in India (BCCI) and the Chetan Sharma-led national selection panel has been facing the wrath of fans and experts online ever since replacing Virat Kohli with Rohit Sharma as the ODI captain of the Indian cricket team. The BCCI confirmed the decision in a tweet on Wednesday while announcing India's Test squad for the upcoming tour of South Africa later this month.

The decision soon became one of the major talking points on social media, drawing mixed reactions from fans and experts of the game. While some felt the decision was in the making for some time, some criticised the BCCI for treating Kohli unfairly. BCCI president Sourav Ganguly, who had earlier explained the reason behind the move, has once again reiterated that Kohli was removed as ODI captain as the selectors wanted only one white-ball captain.

Ganguly, who has himself been a successful captain for the Indian team during his playing days, revealed he had personally requested Kohli to not give up T20 captaincy. Kohli had announced that he will be stepping down as the T20 captain of the Indian team post the T20 World Cup 2021 in October this year while citing workload issues.

"It’s like I said… I personally requested him (Kohli) not to give up T20 captaincy. Obviously, he felt the workload. Which is fine, he has been a great cricketer, he has been very intense with his cricket. He has captained for a long period of time and these things happen. Because I have captained for a long period of time; therefore, I know," Ganguly was quoted as saying in an interview by News18.

"Also, they wanted only one white-ball captain. And that’s why this decision. I don’t know what’s going to happen in future. But as I said, it’s a good team and it has some fantastic players and I hope they will turn it around," the BCCI president added.

BCCI was heavily criticised for the manner in which the decision to remove Kohli was announced. The confirmation came through a tweet with a press release without any explanation from the selectors. Kohli led India in a total of 95 ODI matches, winning 65 games with a win percentage of over 70.

The batting maestro will now b leading the team only in Tests while Rohit will be taking over as full-time ODI captain from the upcoming South Africa series.