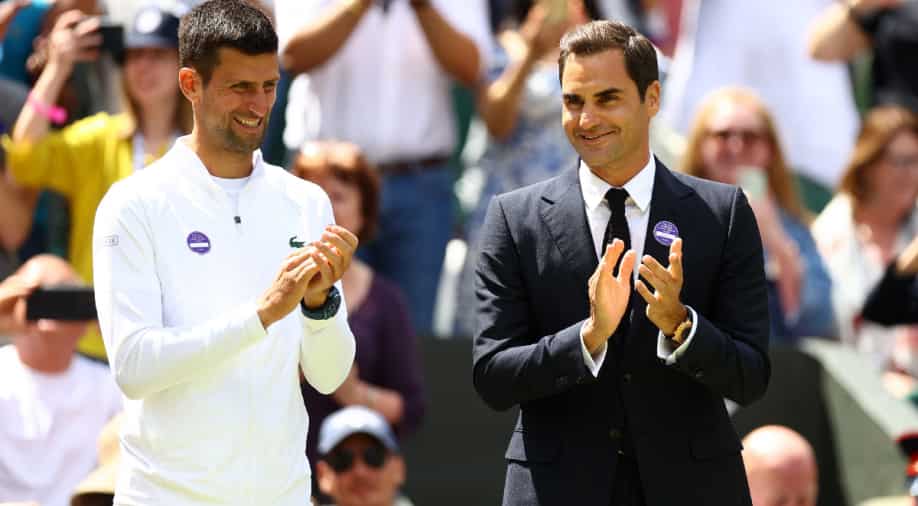 Roger Federer hinted at his return to Wimbledon next year during his surprise visit to the All England Club on Sunday.

A gaping hole was left at Wimbledon this week when Roger Federer`s name was missing from the men`s draw for the first time since 1998 but the Swiss great hinted he could be back at his favourite hunting ground when he made a surprise appearance at the All England Club on Sunday.

"This court has given me my biggest wins and my biggest losses. I hope I can come back one more time," a beaming Federer told the 15,000-capacity crowd who hollered in approval.

Wimbledon`s favourite son swapped his usual tennis whites for a dark suit and tie and was given a rousing standing ovation as he joined a number of Wimbledon champions dating back to the 1960s for Centre Court`s centenary celebrations.

The eight-time champion was the last to stride into an arena that had already welcomed the great and good of tennis, including Billie Jean King, Bjorn Borg, Chris Evert, Stefan Edberg, Venus Williams as well as the Swiss`s Big Four rivals Rafael Nadal, Novak Djokovic and Andy Murray.

While loud cheers could be heard as the champions paraded into Centre Court one by one, a deafening roar resounded around the vast grounds of the All England Club when the man considered as Wimbledon royalty made an appearance to greet his grateful subjects.

The Swiss has not played a competitive match since bowing out in the quarter-finals of last year`s championships to Hubert Hurkacz, the 6-0 mauling he suffered in the final set still a painful memory. Weeks later he announced he had to undergo yet another operation on his knee and having already celebrated his 40th birthday, there were fears that fans would never again see Federer`s silky racket skills in a competitive arena.

Federer, who turns 41 next month, has only committed to playing at his hometown tournament in Basel and the Laver Cup later this year, but on Sunday he seemed delighted to be back on the stage where, as a long-haired teenager, he made his name by dethroning Pete Sampras.

"I`ve been lucky enough to play a lot of matches on this court. It feels awkward to be here today in a different type of role," said Federer, who completed his outfit by wearing white tennis shoes and a purple Wimbledon membership badge on his lapel.

"It`s great to be here with all the other champions." Twelve months ago, the crowd had been hushed into an uncomfortable silence as Federer`s game fell apart in spectacular fashion.

As the Swiss exited left, even he did not know if his ageing body would allow him to come back and compete at the spiritual home of lawn tennis again.

"I`ve missed it here. I knew walking out here last year, it was going to be a tough year ahead. I maybe didn`t think it was going to take this long to come back -- the knee has been rough on me," added the 20-time Grand Slam champion who has had multiple knee surgeries.