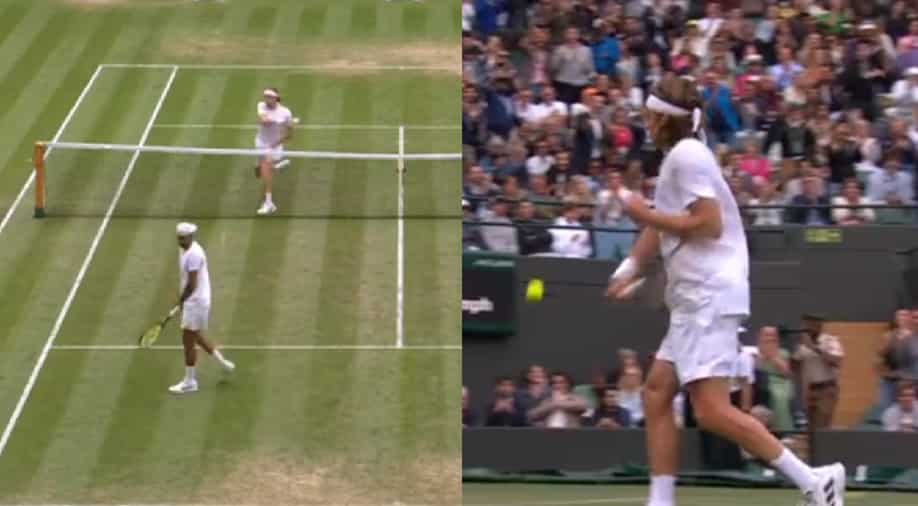 Tsitsipas and Kyrgios were involved in an ugly feud during their Wimbledon clash. Photograph:( Twitter )

Stefanos Tsitsipas tried to hit Nick Kyrgios with a wild smash and almost hit a fan too during the round three clash between the duo at Wimbledon 2022.

Nick Kyrgios and Stefanos Tsitsipas were involved in an ugly feud during the third-round clash between the duo at Wimbledon 2022 on Saturday (July 2). It was an intense duel between the two as tempers flared both on and off the court. Kyrgios got the better of 4th seed Tsitsipas 6-7(2) 6-4 6-3 7-6(7) in a gruelling encounter that lasted over three hours and was marred with controversy.

The tension between the duo started on the court after Kyrgios continuously complained to the match umpire and was also warned for swearing. Tsitsipas, who later called Kyrgios a 'bully', also lost his cool during the game and tried to hit the Australian star with a wild smash.

The incident happened during the third set between the duo when Tsitsipas delivered a hard smash towards Kyrgios trying to hit him with it. The Australian ignored Tsitsipas' attempts but the two were spotted exchanging words after the incident. Tsitsipas later admitted it was a deliberate attempt from him to hit Kyrgios.

Things are getting heated in the Kyrgios-Tsitsipas match at Wimbledon pic.twitter.com/F1H0l3SU2Y

Earlier, during the second set, Tsitsipas couldn't control his frustration after continuous exchanges with Kyrgios and whacked a ball at the crowd in anger. The ball stormed towards the spectators but luckily no one was hit by it. Following his actions, Kyrgios demanded a default against his opponent but Tsitsipas was instead handed a code violation.

Fight night at #Wimbledon #Kyrgios #Tsitsipas. Takes me back to to the Ilie Năstase era. pic.twitter.com/clYxgJDFfF

The feud between Kyrgios and Tsitsipas didn't end on the court and continued off it as the Greek world no.4 went on to label the Australian a 'bully' for his actions. Tsitsipas also said Kyrgios has an 'evil side' to his character.

"Yeah, it's constant bullying, that's what he does. He bullies opponents. He was probably a bully at school himself. I don't like bullies," Tsitsipas said at the post-match media conference.

"I don't like people that put other people down. He has some good traits in his character, as well. But he also has a very evil side to him, which if it's exposed, it can really do a lot of harm and bad to the people around him," he added.

One of the greatest, sad that she is leaving: Rafael Nadal pays tribute to 'inspirational' Serena Williams