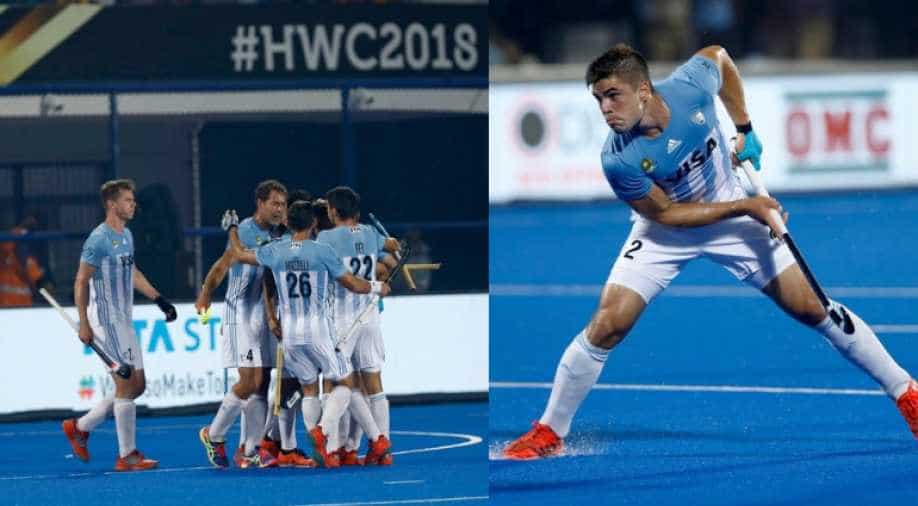 Argentina will play New Zealand in their next pool match on December 3, while Spain will be up against France.

Agustin Mazzilli and Gonzalo Peillat scored a brace each but Olympic champions Argentina were made to dig deep to eke out a 4-3 win over Spain in their Pool A match of the hockey World Cup here Thursday.

Six places may separate the two teams in world rankings but world number eight Spain gave Argentina, ranked second, a run for their money in the high-scoring match that produced end-to-end hockey.

The Los Leones had to dish out every trick from their arsenal to get the better of a fighting Spanish side, which matched their rivals in every department throughout.

Spain stunned the Argentines as early as in the third minute through young Enrique Gonzalez's fine field strike past Argentina goalkeeper Juan Vivaldi from a move which he only initiated.

But a minute later, Mazzilli drew level for Argentina, deflecting in a cross from the right wing past Spain's goalkeeper Quico Cortes.

Spain restored their lead in the 14th minute through a penalty corner conversion by Josep Romeu.

It was end-to-end battle as Mazzilli (15th minute) again came to Argentina's rescue, equalising 45 seconds from the first quarter after receiving a pass from Lucas Villa on the left side.

Just seconds away from the first break of the match, Argentina scored again when drag-flick specialist Peillat converted a penalty corner with precision to hand his side the lead for the first time in the game.

Both the teams played with same intensity and pace in the second quarter but failed to find the net.

As it happened | Argentina 4-3 Spain

The match went on similar lines in the fourth and final quarter with both Argentina and Spain pressing hard for more goals to secure full three points.

But it were the Argentines who succeeded in their effort when Peillatwas was again bang on target from another penalty corner in the 49th minute.

Thereafter, Spain dished out all the tricks, including withdrawing their goalkeeper for an extra player four minutes from the final hooter, but failed to breach the Argentina defence.

Argentina will play New Zealand in their next pool match on December 3, while Spain will be up against France.