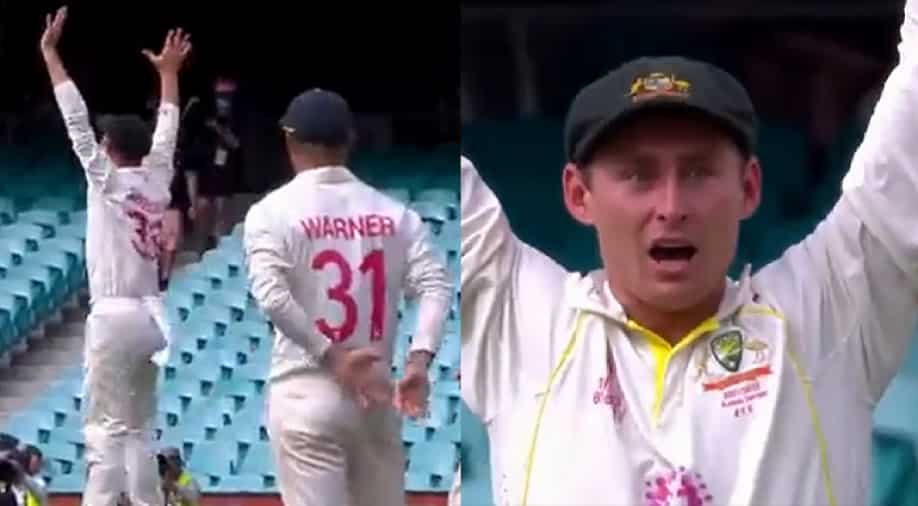 Marnus Labuschagne was the only Australian player to appeal for a caught behind despite the ball missing Jos Buttler's bat by a significant distance.

Australia batter Marnus Labuchange hilariously made a solo appeal for a caught behind dismissal against Jos Buttler on Day 5 of the 4th Ashes Test on Sunday. The fourth Test ended in a draw after England's last pair of James Anderson and Stuart Broad managed to survive the final spell in what was a thrilling finish at the Sydney Cricket Ground (SCG) in Sydney.

It was an enthralling Day 5 filled with intense action as Australia gave their all to continue their winning streak in the Ashes 2021-22. The hosts were on the verge of winning the fourth Test when they required only one wicket in the final two overs of the day. However, Broad and Anderson combined with the bat to deny Australia their fourth straight win.

While it was an action-packed Day 5, Australia batter Marnus Labuschagne had a tongue-in-cheek moment on the field when he ended up bursting into an appeal for a caught-behind dismissal against Jos Buttler despite the England batter not edging the ball. Australia captain Pat Cummins bowled a short delivery against Buttler which was left by the English batter as the ball travelled closely from his bat.

While there was no edge, Labuschagne was seen appealing alone before realising that none of his teammates were interested. The no-look appeal from Labuschagne left the fans in splits on social media as the video of the incident went viral instantly.

Let's give Labuschagne an E for Effort on that appeal #Ashes pic.twitter.com/To5SxDKPMJ

Talking about the Test match, England were handed a massive target of 388 runs in their second innings while Australia needed all ten wickets on Day 5 to win the game. The Aussies once again bowled well as they managed to get closer to victory with nine wickets out of the ten.

However, fifties from Zak Crawley, Ben Stokes and Jonny Bairstow's gritty 41 before Anderson and Broad's fight at the end saw England manage to secure a draw in the Test match. Australia have already clinched the prestigious Urn with three back-to-back wins in the first three games while England are yet to win a game in the Ashes 2021-22.