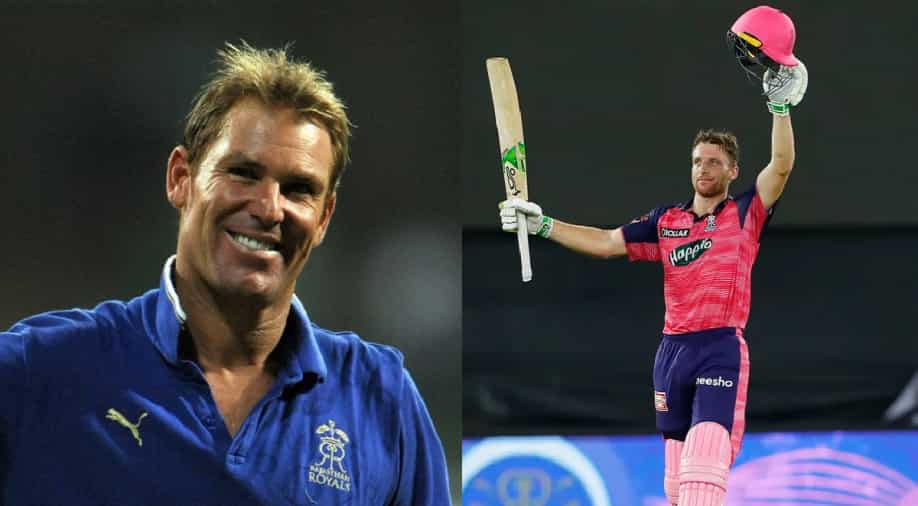 Rajasthan Royals opener Jos Buttler paid tribute to the legendary Shane Warne after powering his team to the final of IPL 2022 with a terrific century against Royal Challengers Bangalore in the 2nd Qualifier.

Jos Buttler slammed a stunning century to power Rajasthan Royals (RR) to a comprehensive 7-wicket win against Royal Challengers Bangalore (RCB) in the 2nd Qualifier at the Narendra Modi Stadium in Ahmedabad on Friday (May 27). Buttler was the star with the bat for RR as he played an unbeaten knock of 106 runs off 60 balls to single-handed help his team chase down the target of 158 runs and secure a spot in the final against Gujarat Titans (GT).

The English opener has been in brilliant form throughout IPL 2022 and has played some match-winning knocks for his team. He continued his stellar run in the 2nd qualifier against RCB on Friday and notched up his fourth century of the season to go past the 800-run mark. Buttler paid tribute to the legendary Shane Warne after RR's win over RCB.

Remembering the former Rajasthan Royals captain, who passed away after a heart attack earlier this year, Buttler said he will be looking down from the heavens with a lot of pride after RR qualified for the final. Warne was the first player signed by RR ahead of the inaugural edition of the tournament in 2008 and is the only captain to have led the side to an IPL triumph.

"Great excitement to be able to play in the final of the biggest T20 tournament in the world.. it's incredibly exciting. Shane Warne has been such an influential figure for Rajasthan Royals and having led the team to the title in the first season. We will miss him dearly but we know he is looking down on us with a lot of pride today," Buttler told Star Sports after powering RR to a 7-wicket win over RCB.

Rajasthan Royals had been paying rich tributes to Warne throughout the season and have done the Aussie legend proud with their impressive performances this season. Ware was serving as a mentor for Rajasthan Royals in the IPL after retiring as a player.

Buttler has been one of the stand out performers for the Rajasthan Royals this season and has enjoyed a remarkable campaign so far. The English batter has already notched up a staggering 824 runs in 16 matches at an average of 58.85 and is currently leading the race for the Purple Cap.

Buttler is only the third batter in the history of IPL to have crossed the 800-run mark in a single season after the likes of Virat Kohli and David Warner. He needs just 25 runs to surpass Warner's tally of 848 runs which came during IPL 2016. RR will take on Gujarat Titans in the final of IPL 2022 at the Narendra Modi Stadium in Ahmedabad on Sunday (May 29).