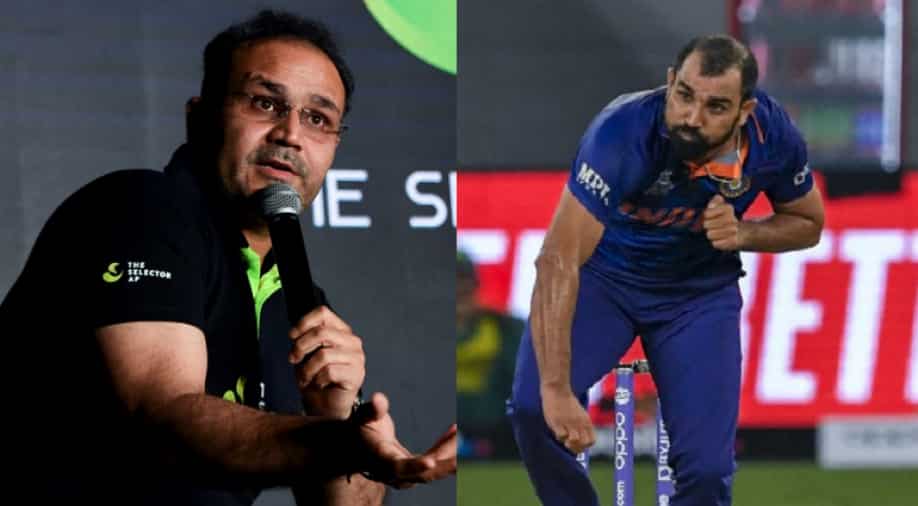 Sehwag extended support to Shami after he was trolled following India's loss against Pakistan. Photograph:( AFP )

Former India cricketer Virender Sehwag extended his support to Team India fast bowler Mohammed Shami after he was trolled post the side's loss against Pakistan in the T20 World Cup 2021 on Sunday (October 24).

Former India cricketer Virender Sehwag came out in support of team India pacer Mohammed Shami, who is being brutally trolled on social media following India's loss against arch-rivals Pakistan in the T20 World Cup 2021 on Sunday (October 24). Sehwag slammed the trolls for abusing Shami, who had a bad day at the office against Pakistan in Dubai.

India lost their opening encounter of the T20 World Cup 2021 against Pakistan by ten wickets to get off to the worst possible start. The defeat also marked an end to India's unbeaten run against the Men in Green in Cricket World Cup. India had a flawless 12-0 record against Pakistan in World Cup matches before Sunday with Pakistan making it 12-1 on Sunday.

Following India's ten-wicket loss in the encounter, fast bowler Shami was viciously trolled on social media. Sehwag took to Twitter to call the trolls 'online mob' as he lashed out at them for attacking the pacer. Sehwag said he stood by Shami and wished him luck for the next match.

“The online attack on Mohammad Shami is shocking and we stand by him. He is a champion and Anyone who wears the India cap has India in their hearts far more than any online mob. With you Shami," Sehwag wrote in a tweet.

The online attack on Mohammad Shami is shocking and we stand by him. He is a champion and Anyone who wears the India cap has India in their hearts far more than any online mob. With you Shami. Agle match mein dikado jalwa.

It was a devastating loss for Team India as both the batsmen and bowlers failed to deliver in the high-octane clash in Dubai. Captain Virat Kohli and Rishabh Pant were the only positives with the bat as they scored 57 and 39 runs respectively to help India post a fighting total of 151 runs on the board.

Also Read: Sehwag reacts to firecrackers being burst in 'parts of India' to celebrate Pakistan's win in T20 WC

However, Pakistan had a walk in the park during the run-chase as Babar Azam (68) and Mohammad Rizwan (79) made a mockery of the Indian bowling attack to take their side home comfortably and secure their first points in the tournament.

India will be hopeful of staging a comeback in the showpiece event when they lock horns with New Zealand in their next game on October 31.