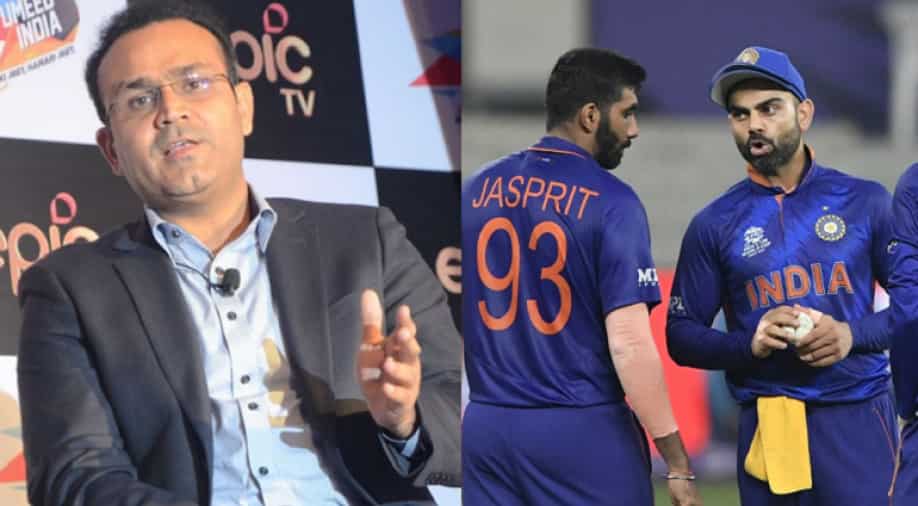 Virender Sehwag reacted to crackers being burst in parts of India after Pakistan's win. | Photo - IANS/AFP | Photograph:( Others )

Babar Azam-led Pakistan scripted history as they finally managed to beat arch-rivals India in a World Cup game after a long wait of several decades. Pakistan hammered India by ten wickets in their opening encounter of the ongoing T20 World Cup 2021 at the Dubai International Stadium in Dubai on Sunday (October 24) to bring an end to India's flawless winning streak against the Men in Green in World Cup matches.

India had never lost a World Cup game against Pakistan before Sunday, with seven wins in seven matches in ODI World Cup and five wins in five games in T20 World Cup. However, the magnificent streak was halted by Babar & Co. in Dubai, where Pakistan have now won their last seven T20I matches in a row.

While fans in Pakistan took to the street in jubilation to celebrate their country's first win against India in a World Cup match, firecrackers were allegedly burst also in parts of India. Former India cricketer Virender Sehwag took to Twitter to allege firecrackers were burst in 'parts of India' after the team's loss against Pakistan on Sunday.

Sehwag took a dig at fans celebrating Pakistan's victory and also aimed a swipe at those urging people to not burst crackers during Diwali but are resorting to burning crackers over a cricket match.

“Firecrackers are banned during Diwali but yesterday in parts of India there were firecrackers to celebrate Pakistan‘s victory. Achha they must have been celebrating victory of cricket. Toh, what’s the harm in fireworks on Diwali," Sehwag wrote in a tweet.

Sehwag's tweet quickly became the talk of the town on social media with a section of fans supporting him for criticising the hypocrisy over the burning of firecrackers during Diwali while others suggested there was no need for the former cricketer to share the tweet.

India recorded the worst possible start to their campaign in the T20 World Cup with the crushing ten-wicket loss at the hands of Pakistan. Batting first, India suffered a top-order collapse as they were restricted on a paltry 151 before Babar Azam and Mohammad Rizwan slammed half-centuries apiece to take their team over the line comfortably.

India lost their first game in six meetings against Pakistan in the history of the T20 World Cup and will be looking to bounce back when they face New Zealand in their next game on October 31.