Harry Kane scores on return but Spurs fall at Burnley 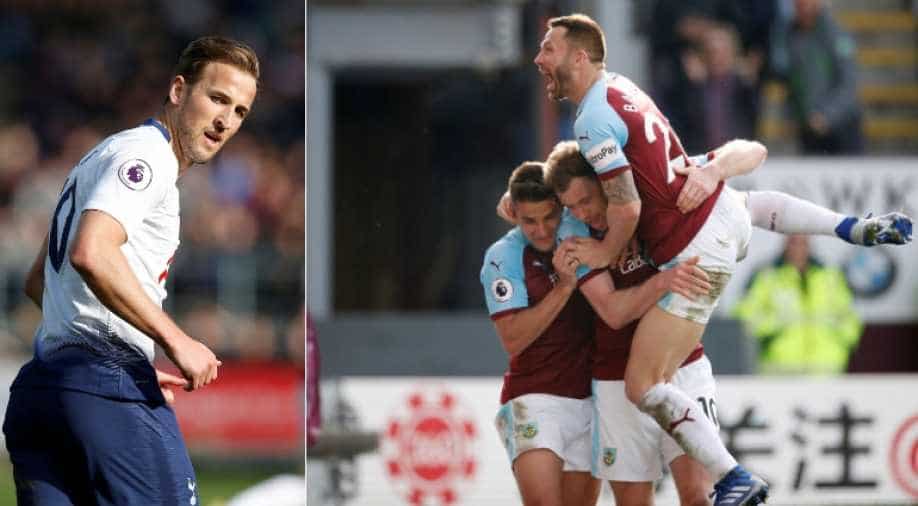 For third-placed Spurs, who trail leaders Manchester City and Liverpool by five points, this may prove to be a loss that leaves them with too much ground to make up.

Harry Kane scored on his return from injury for Tottenham but his side fell to a surprise 2-1 defeat at Burnley, which severely dented their Premier League title hopes on Saturday.

Ashley Barnes' 83rd minute winner for Burnley, after Kane had cancelled out Chris Woods' opener, extended their unbeaten run to eight games and moved them up to 13th place in the league with one of their best results since returning to the top flight.

But for third-placed Spurs, who trail leaders Manchester City and Liverpool by five points, this may prove to be a loss that leaves them with too much ground to make up.

At an unseasonably sun-splashed Turf Moor, Kane returned to the Spurs line-up for the first time since suffering an ankle injury against Manchester United on Jan. 13 with England manager Gareth Southgate watching from the stands.

But he will have left East Lancashire also impressed by Burnley central defensive pair of James Tarkowski and Ben Mee who kept the England captain and the Spurs attack well under control.

Spurs made a slow start to the lunchtime kick-off game and it was not until the 16th minute that they threatened when Kane worked some space for himself, on the edge of the penalty area, but his left-foot effort was comfortably wide of Tom Heaton’s post.

Burnley were harrying and closing down well in midfield, with Ashley Westwood and Jack Cork particularly busy, and Spurs struggled to find their rhythm or any real openings for their captain.

Barnes went close to an opener in the 33rd, Jeff Hendrick pulling the ball back and the Burnley striker’s first time effort flashed just over the bar. The effort would surely have impressed the watching Austrian national team coach Franco Foda, given Barnes’ eligibility for the country through his paternal grandmother.

Burnley’s disciplined defending ensured the teams went in level at the break but four minutes after the resumption, Kane fired another warning, a dangerously dipping and swerving shot from 30 metres out bringing out the best in Heaton.

Burnley took the lead in the 57th minute with a glancing header by Wood, who rose ahead of Juan Foyth to angle in a Dwight McNeil corner.

Spurs believed the corner should not have been awarded but they responded positively.

Eight minutes later Kane, who had looked a little rusty, ran on to a quick throw-in from Danny Rose, got behind Mee and slipped the ball past Heaton.

Burnley were angered that Rose had taken the throw-in several metres ahead of the spot were the ball went out of play but their protests were in vain.

The Clarets, who have been in or around the relegation zone for most of the season, grabbed the winner though when substitute Johann Berg Gudmundsson found Barnes at the back post and the striker fired in his fourth goal in as many games.

Members of the Spurs coaching staff furiously protested against the referee after the final whistle.