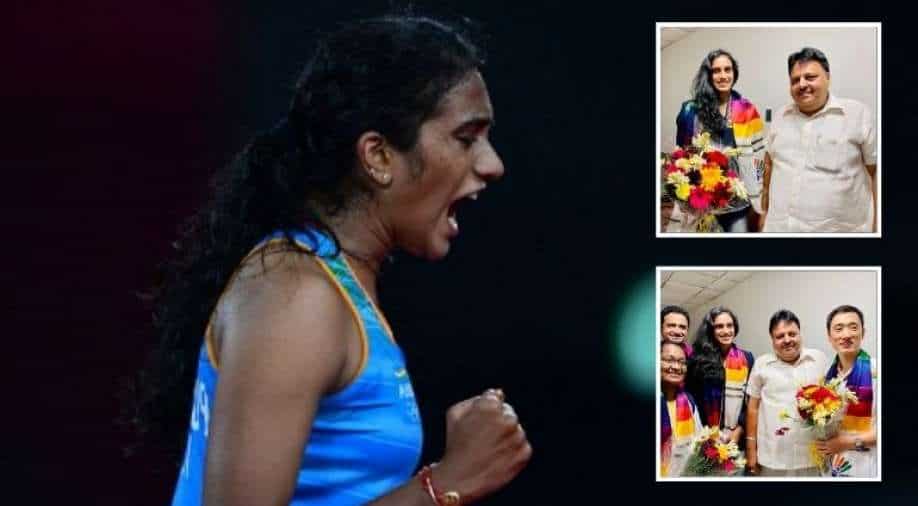 "I am thankful to everyone including the Badminton Association for supporting and encouraging me," said Sindhu.

Olympic medallist PV Sindhu said that she is "very happy and excited" after returning to India from Japan on Tuesday (August 3) post a remarkable run at the Tokyo Games. The ace shuttler won a medal in the badminton women's singles event. She defeated China's He Bing jiao 21-13, 21-15 to add a bronze to Rio 2016 silver.

"I am very happy and excited. I am thankful to everyone including the Badminton Association for supporting and encouraging me. This is a happy moment," said Sindhu on her return to India.

🤩 Watch first reaction of @Pvsindhu1 after receiving a warm welcome upon her arrival from @Tokyo2020 👇#SmashedForTheGlory #Badminton #Tokyo2020 #Cheer4India#TeamIndia pic.twitter.com/ZmOXDlmGrM

Sindhu became the first Indian woman athlete to win two individual Olympic medals, and the second Indian after wrestler Sushil Kumar. Sindhu has been earning praises for her outstanding run at the Tokyo Olympics. Apart from the semi-final against Tai Tzu Ying of Chinese Taipei, she didn't drop a single game in her five wins.

After winning the bronze medal, Sindhu opened up on a range of topics related to her Tokyo journey in an exclusive chat with WION. She said that winning the elusive medal for the country was important for her. "I knew the difference between the third position and fourth position and winning a medal for the country was important for me," she said during the exclusive chat.

On her bronze-medal match, she said, "It makes me feel really happy. I had a lot of emotions going through me but my coach [Park Tae-Sang] motivated me. I told myself that need to get this medal for my country and need to play for myself."

Sindhu bagged the third medal for India at the Tokyo Olympics as she overcame the fighting abilities of China's Bing jiao to join Mirabai Chanu (silver) and Lovlina Borgohain (bronze medal assured) with an outstanding performance at the Musashino Forest Sport Plaza court 1.