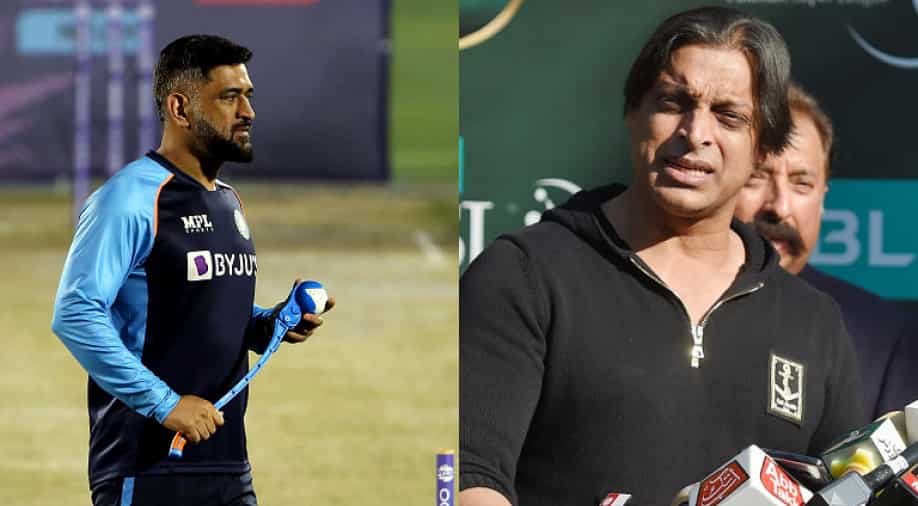 Shoaib Akhtar came with hilarious suggestions for Pakistan on how to stop India. | Photo - ANI/AFP | Photograph:( Others )

Former Pakistan pacer Shoaib Akhtar came with three hilarious suggestions for Pakistan on how to stop India in their T20 World Cup 2021 clash.

All eyes will be on India and Pakistan as the arch-rivals gear up to resume their rivalry in the ICC T20 World Cup 2021. The blockbuster clash will be staged at the Dubai International Stadium in Dubai with millions of fans around the world cheering for the two teams. The high-pressure clash will be the opening game for both India and Pakistan in the showpiece event this year.

Ahead of the much-awaited encounter, former Pakistan pacer Shoiab Akhtar came up with some hilarious suggestions for Babar Azam & Co. when asked how should they plan to stop Team India. Akhtar jokingly said Pakistan should first give all the Indian players sleeping pills so they can't turn up for the game before adding two more hilarious suggestions.

"Give sleeping pills to India first. Second, stop Virat Kohli from using Instagram for two days (chuckles). And third, ask MS Dhoni to not come to bat himself, I am telling you he's still the most in-form batter," Akhtar told Sportskeeda.

He recently led Chennai Super Kings to their fourth IPL title triumph this season and will be looking to guide the Indian team to glory at the T20 World Cup 2021. Dhoni remains the only Indian captain to have won the T20 World Cup so far.

India and Pakistan have met five times in the T20 World Cup so far since the inaugural edition in 2007 with the Men in Blue remaining unbeaten in all five games. India hold a 12-0 record against Pakistan overall when it comes to World Cup matches in both ODIs and T20Is.

India will be looking to continue their unbeaten streak against Pakistan in Dubai on Sunday.