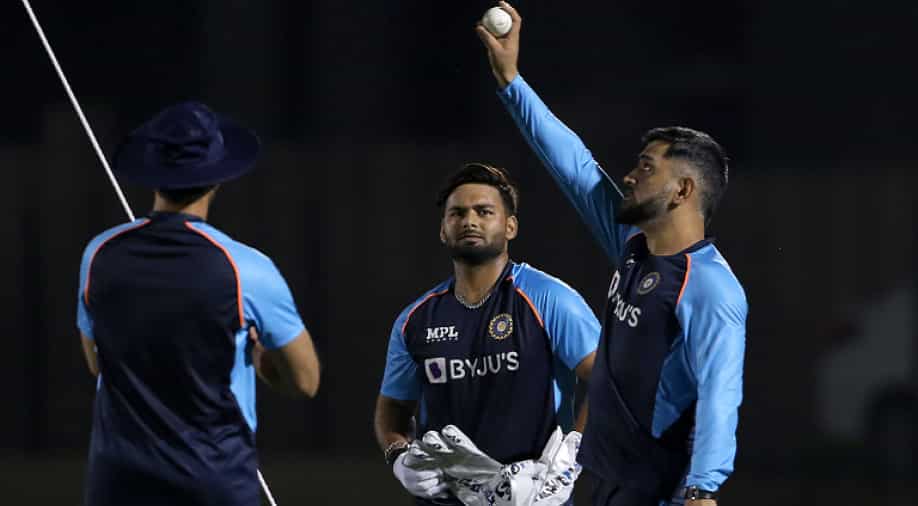 Pakistan fans came up with a request for MS Dhoni ahead of India clash. Photograph:( ANI )

Some Pakistan fans were seen enjoying friendly banter with MS Dhoni and KL Rahul at the Dubai Stadium ahead of the much-awaited clash between India and Pakistan in T20 World Cup 2021.

MS Dhoni has made his comeback to the Indian dressing room for the first time since announcing his retirement from international cricket last year. He is currently in UAE with the rest of the Indian squad as a mentor for the ongoing T20 World Cup 2021. From having a one-on-one session with players to becoming a throwdown specialist in the nets, Dhoni has been doing his best to help the players prepare for the crunch opener against Pakistan on October 24 (Sunday).

India will be opening their campaign in the T20 World Cup 2021 with a meeting against Babar Azam-led Pakistan at the Dubai International Stadium in Dubai on Sunday. The hype surrounding the game is at an all-time high with the arch-rivals locking horns for the first time since the 2019 ODI World Cup.

Ahead of the all-important clash, some Pakistan fans were seen enjoying a friendly banter with MS Dhoni and KL Rahul in the Dubai stadium. Mentor Dhoni was seen walking out with Rahul and other Indian players after their training session when some Pakistan fans urged them to spare Babar Azam & Co., and not play well against them.

"Rahul please don't play well tomorrow," a Pakistan fan was heard shouting as Rahul walked past her. "Mahi, please leave this match, win next one, not this match please," she can be heard telling Dhoni as he walks out with India pacer Jasprit Bumrah. Some other fans can also be seen enjoying banter with Dhoni in the video which has gone viral on social media.

While Pakistan have already announced their 12-man squad for the India clash, Virat Kohli & Co. have not revealed their possible 12. India defeated Pakistan by 89 runs via the DLS method in the last meeting between the two teams in the ODI World Cup in 2019.

India and Pakistan have met on five occasions so far in the T20 World Cup with the Men in Blue winning all five games. India are yet to be beaten by Pakistan in a T20 World Cup game. In ODI World Cup as well, India have an unbeaten 7-0 record against Pakistan.