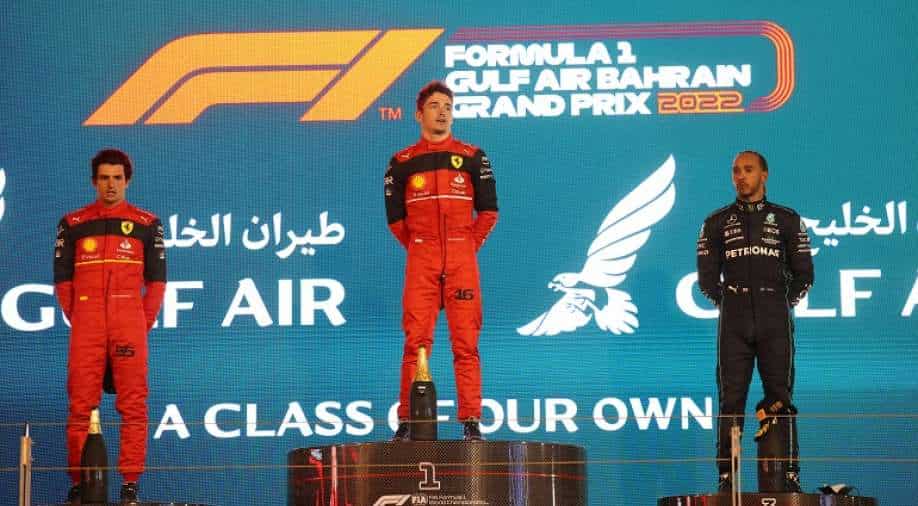 Charles Leclerc won the 2022 season-opening Bahrain GP as Carlos Sainz backed up a Ferrari one-two while Red Bull suffered a double DNF to give Lewis Hamilton the final podium place in a stunning start to the season on Sunday.

The Monegasque, who started from pole, crossed the line 5.5 seconds ahead of Spaniard Sainz.

World champion Max Verstappen, who several times went wheel-to-wheel with Leclerc in a battle for the lead, was on course for second but was forced to retire three laps from the end, with teammate Sergio Perez suffering the same fate shortly after, as Red Bull left Bahrain with nothing.

“Again, I keep repeating myself, but the past two years have been incredibly difficult for the team," said Leclerc, after ending a 45-race winless streak dating back to Singapore 2019 for the sport's most successful outfit.

"It was a huge opportunity for the team -- we couldn't hope for better."
Sunday’s win was the third of the 24-year-old Leclerc’s career.

He earned it by fending off a charging Verstappen after the first stops, with the pair swapping places over several laps, and later timing his restart after a safety car period to perfection.

It was also the Italian team’s seventh triumph at the Sakhir desert track and their first season-opening one-two since 2010, when Fernando Alonso led Felipe Massa to victory in Bahrain.

The result put Leclerc, who also set the fastest lap and was voted driver of the day by fans, in the overall lead of the drivers' standings.

Ferrari, who opened the 2017 and 2018 seasons with a win but have not won a championship since 2008, lead the constructors' standings ahead of Mercedes.

"Firstly, a big congratulations to Ferrari, happy to see them doing well again," said seven-times world Hamilton, who for much of the race was running a distant fifth.

"I think it was such a difficult race, we struggled throughout practice but we did the best we could," the 37-year-old Briton added.

F1 returnee Kevin Magnussen put Haas back in the points with a solid fifth-place finish.

The result put the team, who in 2021 finished last and were the only outfit to not score a point, third in the overall standings.

Valtteri Bottas was sixth in his first race for Alfa Romeo, ahead of Alpine's Esteban Ocon, who served a time penalty for pushing the Haas of Mick Schumacher into a spin.

Guanyu Zhou, who became the first Chinese driver to race in Formula One, scored the final point in tenth on his debut for Alfa Romeo.

Schumacher missed out on scoring his first points but still took home his best result so far in 11th.

Pierre Gasly failed to finish after his AlphaTauri expired in a plume of smoke and flame.