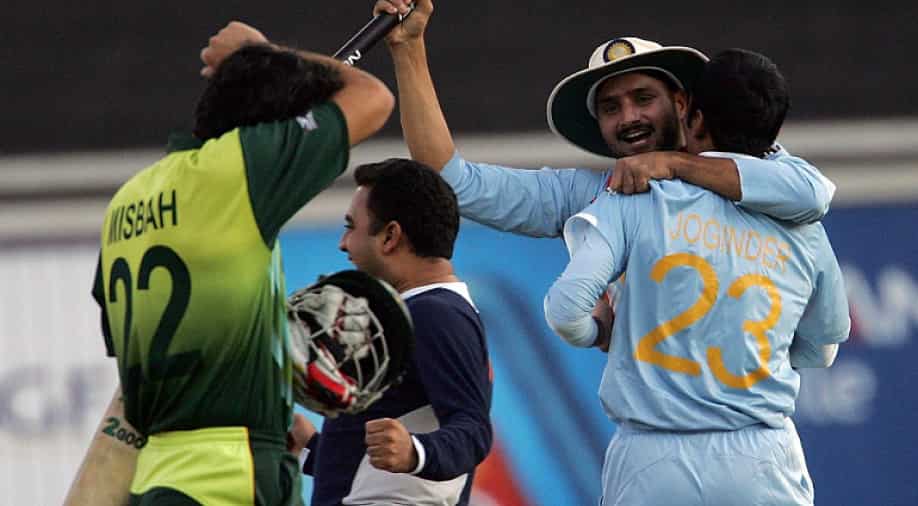 Veteran Indian spinner Harbhajan Singh recently recalled the 2007 T20 World Cup final where he was smashed for three sixes in an over by Misbah-ul-Haq.

An India-Pakistan game is always a high-pressure contest with the expectations at an all-time high on both ends. The pressure sometimes gets the better of players and can lead to errors. In a format like T20 cricket where the margin of error is too less, any mistake can prove to be costly for a team.

Veteran India spinner Harbhajan Singh recently recalled the final of the 2007 T20 World Cup between India and Pakistan and revealed how he was under massive pressure after being hit for three sixes in an over by former Pakistan captain Misbah-ul-Haq during the run-chase.

Harbhajan said he felt like he was bowling a 40-ball over when Misbah was taking him to the cleaners in the game and wanted to finish his six balls quickly. The veteran spinner, who has been part of India's 2007 T20 World Cup and 2011 ODI World Cup-winning sides, said a player is on his own when he is under pressure.

“In the 2007 World Cup, when Misbah-ul-Haq hit me for three sixes, I just wanted to finish my over. It felt like I am bowling a 40-ball over for me because I was so much under pressure,” Harbhajan was quoted as saying by India Today.

“What I feel is that when you are under the pump, you or on your own.

“Yes, a captain can tell you, take it easy, should this bowl this delivery, but it is you who have to deliver, and if you are under tremendous pressure, you can’t execute it,” the veteran spinner added.

Asked to chase 158 runs in the 2007 T20 World Cup final, Pakistan were left reeling at 76/5 when Misbah played a brilliant knock of 43 runs to keep them in the game. However, he couldn't get them over the line and was dismissed in the final over by Joginder Sharma as India registered a thrilling win by 5 runs.

India have never lost against Pakistan in the history of T20 World Cup and will be aiming to keep their winning streak intact when they lock horns with the arch-rivals on October 24 in Dubai in the T20 World Cup 2021.