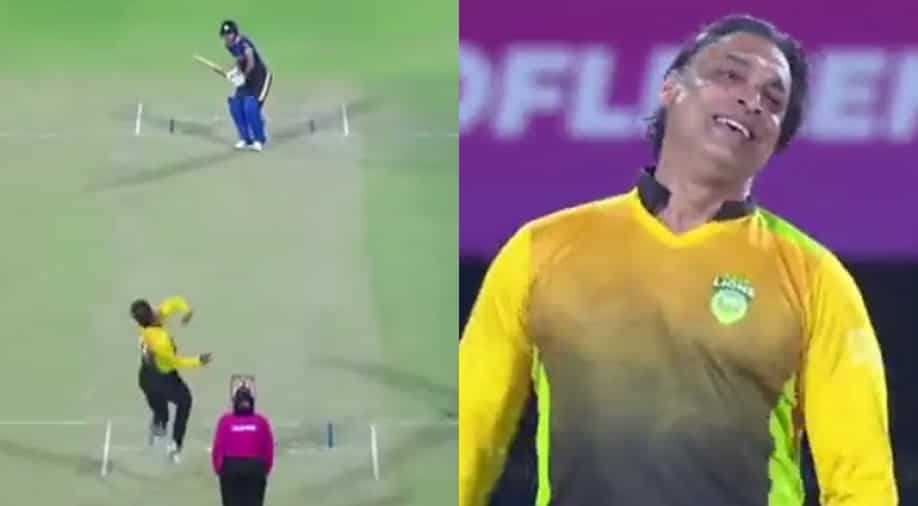 It was a nostalgic affair as cricket fans got to witness some of the yesteryear greats ply their trade on the field once again in the ongoing inaugural edition of the Legends League Cricket (LLC). The tournament which features some of the best cricketers from the bygone era kicked off at the Al Amerat Cricket Ground in Oman on Thursday.

India Maharajas locked horns with Asian Lions in the opening game of the tournaments. While the India Maharajas team consists of some of the Indian greats like Virender Sehwag, Yuvraj Singh, RP Singh, Harbhajan Singh, and Irfan Pathan among others, the Asia Lions squad has legends from Pakistan, Sri Lanka and Afghanistan.

As the two teams met on Thursday, the battler between former India batter Mohammad Kaif and former Pakistan pacer Shoaib Akhtar stole the show. The old foes came up against each other once again and Akhtar was once again left a little annoyed as Kaif chose to walk down the track while facing him.

Akhtar, who was regarded as one of the fiercest bowlers of his time, still holds the record for bowling the fastest delivery in international cricket. Famously known as the Rawalpindi Express, Akhtar used to trouble the best of batters with his sheer pace during his playing days.

However, Kaif was one of those batters who shared to charge down against Akhtar while batting. Kaif did the same while facing Akhtar in the Legends League Cricket game on Thursday and was seen trying to walk out against the former Pakistan pacer. Akhtar, who had previously stated he never liked Kaif's approach of walking out while batting against him, once again expressed his displeasure jokingly.

Post the conclusion of the game, Akhtar said he felt like punching Kaif after seeing him walk out against him once again. “He is walking towards me again. I just feel like punching him,” Akhtar said in a post-match interview as he burst into laughter.

“I have told him [Kaif] many-a-times on television to not walk on him but he did it again,” he added.

Talking about the game, India Maharajas defeated Asia Lions by six wickets after chasing down the target of 176 runs with five balls to spare. Yusuf Pathan was the destructor-in-chief for the India Maharajas as he smacked a quickfire 80 off 40 balls laced with nine fours and five sixes.

Kaif scored an unbeaten 42 off 37 balls and posted a 117-run stand for the fourth wicket with Pathan to take India Maharajas to a thrilling win in the game.