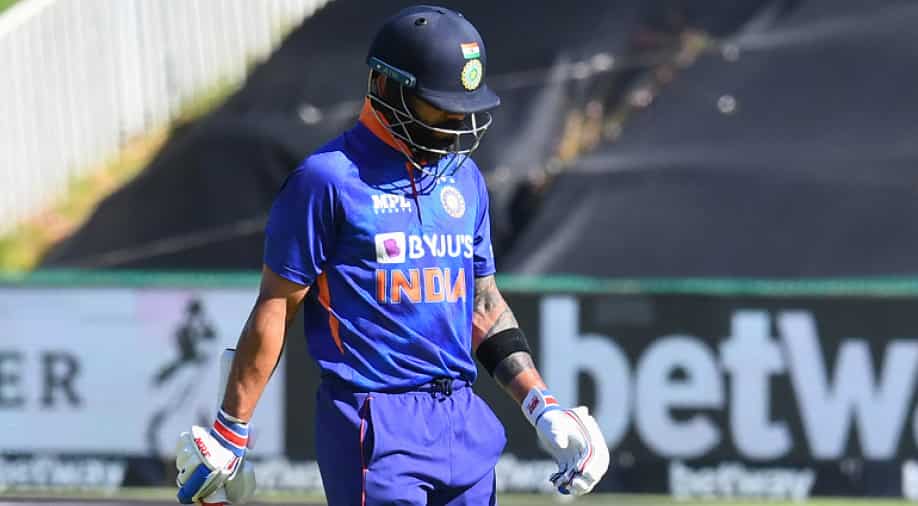 Virat Kohli was dismissed on a duck in the second ODI against South Africa at the Boland Park in Paarl on Friday. Kohli created an unwanted record with his five-ball 0.

Virat Kohli endured a disappointing outing with the bat in the ongoing second ODI between India and South Africa at the Boland Park in Paarl on Friday (January 21). The former India captain was dismissed by spinner Keshav Maharaj without opening his account after managing to face just five balls in his innings.

After opting to bat first in the must-win game, India got off to a good start as openers KL Rahul and Shikhar Dhawan added 63 runs for the first wicket before the left-hander was dismissed by Aiden Markram on 29 off 38 deliveries. Kohli came out to bat at number three and was expected to build a partnership with Rahul.

However, Kohli failed to get off to a good start and was sent packing by Maharaj. It was a tossed up delivery from Maharaj, which Kohli was expected to dispatch but the former India skipper played a very poor shot as the ball landed straight into the hands of Temba Bavuma in the cover region. It was a soft dismissal as Kohli recorded his 14th duck in ODIs.

With his 14th duck, Kohli went past his India teammate Rohit Sharma and current India head coach Rahul Dravid in the list of most ducks for India while batting at no. 1 to 7 positions. Kohli joined the likes of Virender Sehwag and Suresh Raina in an unwanted list of Indian batters with 14 ducks in ODIs. He is now joint-second on the mist of Indian batters with most ducks in ODIs while batting at no.1 to 7.

A long drought without a hundred for Virat Kohli

Kohli's century drought continues to extend in international cricket as the batting maestro struggles to find consistency with the willow. He has now gone 17 innings without a century in ODIs - his longest streak without scoring a ton in the fifty-over format.

After Kohli's dismissal, skipper Rahul combined with Rishabh Pant to steady the ship for India as both batters notched up half-centuries apiece. While Pant slammed a quickfire 85 off 71 balls, Rahul notched up 55 off 79 deliveries to add 115 runs for the third wicket.