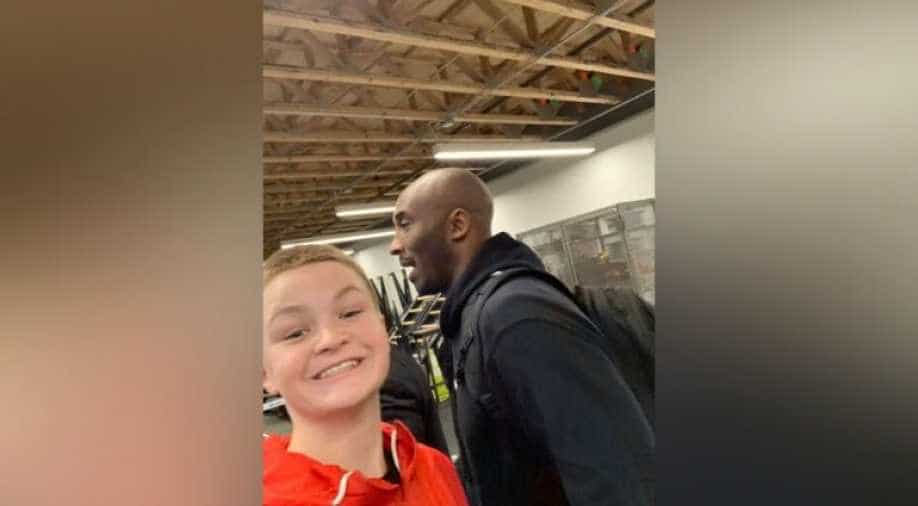 Fan's mother took to Facebook and posted the picture.

Kobe Bryant and his 13-year-old daughter Gianna were among the nine passengers who died in a fatal helicopter crash on Sunday morning. They were en route to a basketball match in Thousands Oak, in which Bryan's daughter was expected to play. Former Lakers legend was expected to coach the team.

Young fan's selfie with Bryant has emerged on social media, many suggest that this could be his last photo before the crash. Fan's mother took to Facebook and posted the picture. The caption read: "Been off FB for a bit, but I had to post. This was yesterday. He told Brady 'we will take a better pic tomorrow'. I just can’t believe it. I saw the crash on a Malibu News station and said 'sure hope that wasn’t Kobe'. Freaky I thought it was him and it was."

Kobe Bryant's untimed death shook the whole world. He was considered one of the greatest basketball players of all time. He led his team Lakers to 5 NBA titles. The American is the fourth in the list of all-time scoring list in NBA history. He was recently succeeded by his team's LeBron James. Kobe Bryant was well known as 'The Black Mamba', he was an 18-time All-Star player. He was the 'Most Valuable Player' in the year 2008. He scored 33,643 points in his career in NBA. Mourners place tributes as they gather in Microsoft Square near the Staples Center to pay respects to Kobe Bryant after a helicopter crash killed the retired basketball star, in Los Angeles, California, US, January 26, 2020.| Reuters

His fans came out on the streets of Los Angeles to offer condolence to the Basketball great, Global icons from all walks of life sent their condolences messages on the social network.

Kobe was a legend on the court and just getting started in what would have been just as meaningful a second act. To lose Gianna is even more heartbreaking to us as parents. Michelle and I send love and prayers to Vanessa and the entire Bryant family on an unthinkable day.

There’s no words to express the pain Im going through with this tragedy of loosing my neice Gigi & my brother @kobebryant I love u and u will be missed. My condolences goes out to the Bryant family and the families of the other passengers on board. IM SICK RIGHT NOW pic.twitter.com/pigHywq3c1

My heart is in pieces hearing the news of this unimaginable tragedy. I can’t fathom what the families are going through. Kobe meant so much to me and to us all. Sending my prayers, love, and endless condolences to Vanessa and the family and anyone who lost someone on that flight.

My heart truly mourns over the news today. Kobe was a great mentor and friend to me. You and your daughter will live forever in our hearts. There are not enough words to express my deepest sympathies to the Bryants and every family suffering from this tragedy. RIP my friend pic.twitter.com/VRmgaOaITT