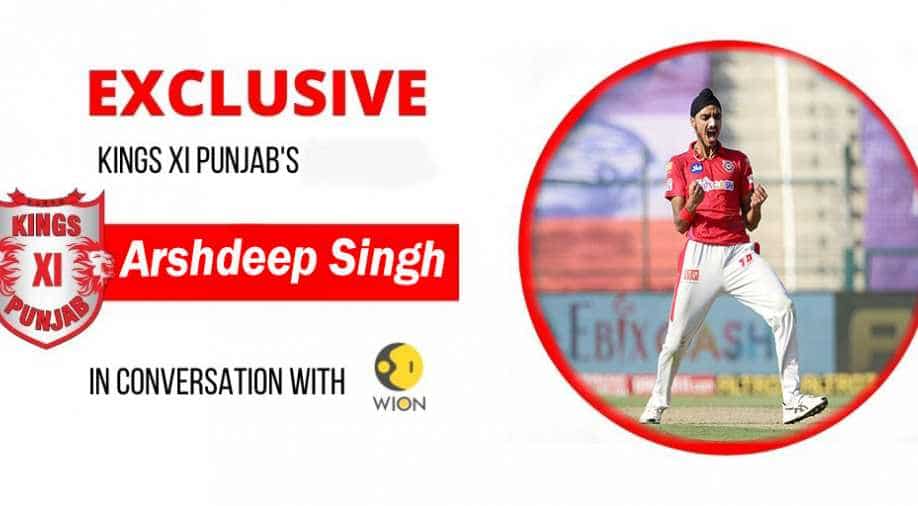 In an exclusive interview with WION’s Subhayan Chakraborty, Kings XI Punjab pacer Arshdeep Singh spoke about sharing the dressing room with some of the biggest names in world cricket, KL Rahul’s captaincy, learning from Anil Kumble and Charl Langeveldt, bowling to Andre Russell and more.

Indian Premier League (IPL) is known as a platform where ‘talent meets opportunity’. While many youngsters have used the platform to improve their game and gain the much-needed experience to take their talent a notch-above, many crumble under the sheer pressure and demand of arguably the best T20 tournament in the world.

One player, who has impressed in IPL is Kings XI Punjab’s left-arm seamer Arshdeep Singh, who made his debut for the franchise in 2019, and has continued to impress with his control, variations while holding his nerves in pressure situations.

In an exclusive interview with WION’s Subhayan Chakraborty, Kings XI Punjab pacer Arshdeep Singh spoke about sharing the dressing room with some of the biggest names in world cricket, KL Rahul’s captaincy, learning from Anil Kumble and Charl Langeveldt, bowling to Andre Russell and more.

Arshdeep has been a welcome addition to KXIP’s bowling unit in IPL 2020 and the youngster has made headlines by bowling crucial overs for the Punjab outfit while picking up four wickets in three matches. He further boasts an eye-catching economy of 7.80.

After having a successful trial in 2019, Arshdeep impressed the KXIP staff and scouts with his execution in death overs and was picked up by the franchise in the IPL 2019 auction. Still carving his way to the top, Arshdeep is steadily becoming a household name as he terms the KXIP franchise as a “family”. The 21-year-old is beaming with confidence while putting up some impressive numbers for his side in IPL 2020.

“It is always a special feeling playing in the IPL and for Kings XI Punjab. Honestly, it is no less than a family and I have always felt comfortable playing for this franchise,” Arshdeep told WION in an exclusive interview.

“It’s all about confidence, I think. Last season, I was new to the tournament and different situations this tournament puts you in but this season, it doesn’t feel like an alien situation and I feel I belong to this competition. I have backed my abilities and continue to do so,” the member of Under-19 World Cup 2018 added. 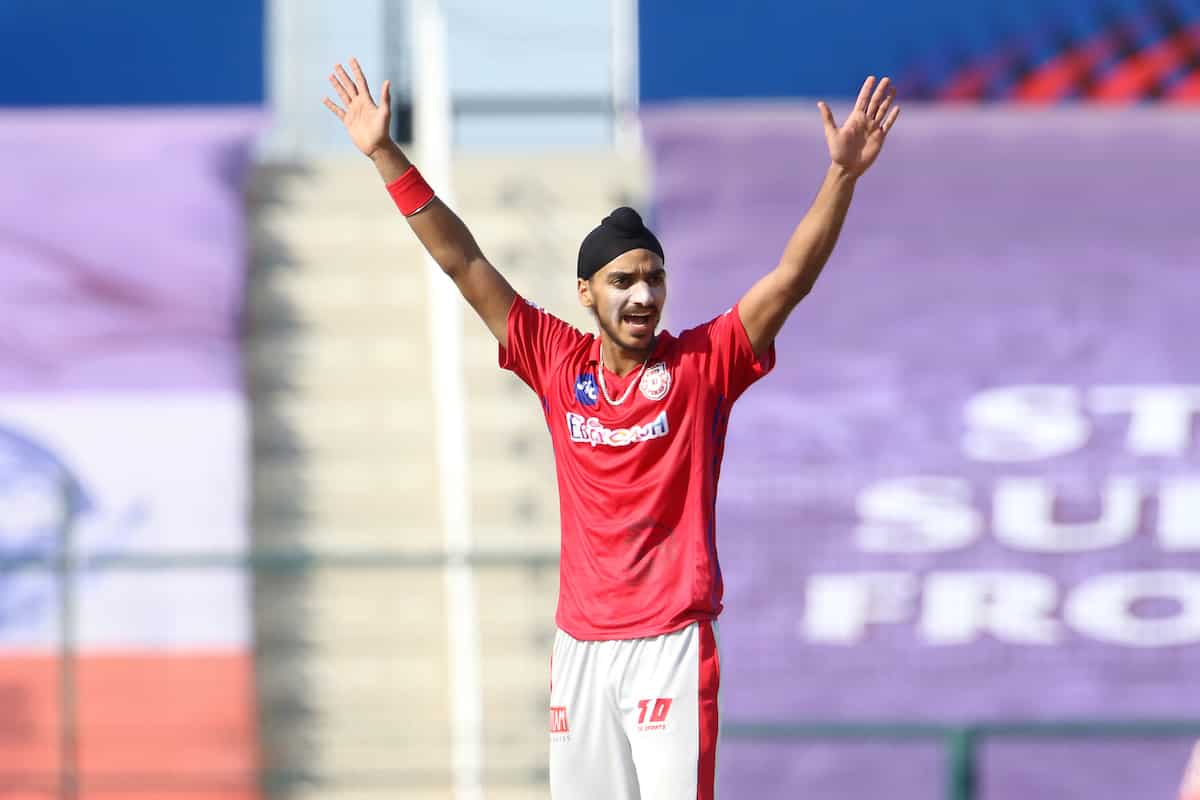 Arshdeep has bowled in some crunch situations in the 13th edition of IPL but has left everyone impressed with the maturity he has shown with the ball.

The likes of Mandeep Singh and Ravi Bishnoi have already hailed the influence of Anil Kumble in the dressing room and how the former Indian skipper backs his players to bring confidence factor into the play. When asked about Anil Kumble and bowling coach Charl Langeveldt, Arshdeep spoke in similar lines as he heaped praise on the coaching staff while explaining how they give him and other players the freedom to come up with their own plans.

“Both (Anil Kumble and Charl Langeveldt) have been legends of the game at their time. I am trying to pick their brains as much as possible. The experience they share is always helpful for me and other players as well. Charl just asks me to back my execution and talent and gives me the freedom to bowl according my comfort. And Anil sir is so helpful with everything. He always tells me to come to approach them or the captain and talk to them about whatever I am feeling about my bowling plans and gives me a free hand in what I want to do in a particular match or situation,” Arshdeep said. 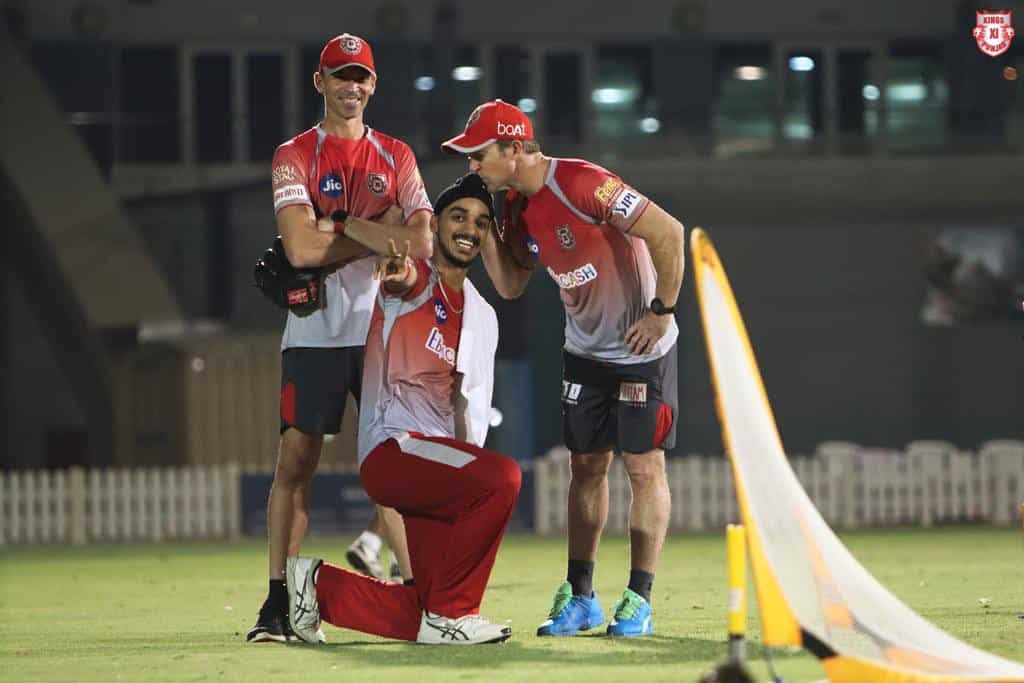 KXIP added some big names to their squad for IPL 2020 with the likes of Sheldon Cottrell, Jimmy Neesham, Chris Jordan among many others joining in. The KXIP dressing room boasts some huge names in the world of cricket. For Arshdeep, it is simple. Just keep picking their brains and keep learning.

“It is a big boost for me as I have been learning plenty of things from these guys. They might not enjoy my company that much as I always keep on asking questions” (laughs) but I make sure that I take everything from them”

KXIP also have some good domestic talent in their ranks. While there is always competition for places within the team, Arshdeep is of the view that regardless of whoever finds his name in the playing XI or in the bench, the mantra is to keep backing the team.

“There is a healthy competition. It is really good to have great bunch of youngsters in the squad. We can share a laugh and talk about things. Some of us know each other from under-19 days. It is about enjoying each other’s company and not about who will play or who will sit out. We just back each other regardless of whoever play”

Arshdeep made a massive impact in KXIP’s match against KKR where he conceded just 25 runs off his four-over quota while sending Andre Russell packing in the 19th over. He also had a maiden in his spell as the youngster stunned the KKR batting unit with his impeccable execution of wider deliveries at an almost perfect angle. His celebration, after dismissing Russell summed it up all.

“No one would love to bowl to Andre (laughs). But we planned about Andre a lot in the meeting with coaching staff and KL. We always plan in-depth when facing the likes of AB de Villiers or Andre Russell or other big names in T20 cricket. The plan was to keep it simple and back our plans and when the execution comes off perfectly, it feels good.

“The feeling of picking any wicket is great. The celebration came out naturally due to the heat of Abu Dhabi (laughs). But on a serious note, it was a big wicket for the team and of course, myself. So it was pure passion, you can say. It was great to get that wicket,” Arshdeep explained. 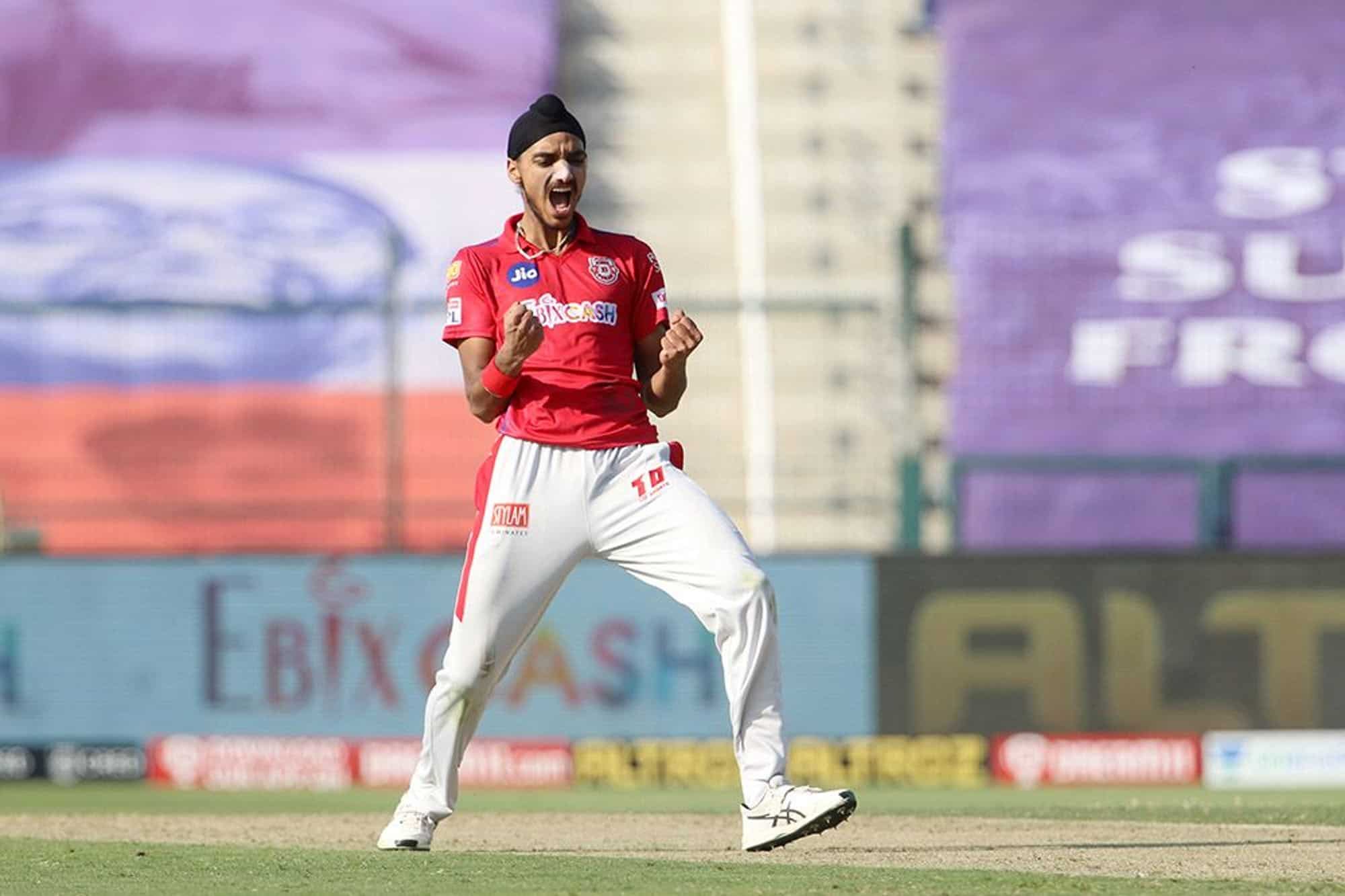 The most important thing for a youngster is to grasp everything in a bid to become better. While Arshdeep has shown great signs of improvement, he knows that players lose focus too early and doesn’t want to make the same mistake.

“My biggest learning has been that many lose their focus when they come to IPL and the environment but main thing is to keep yourself focused. Many people try too many things in IPL but for me, it is about backing my talent and skill-set," said the southpaw.

Irfan Pathan’s first-over hat-trick against Pakistan in 2006 made Arshdeep fall in love with his bowling. While Wasim Akram is the go-to favourite for all the pacers, the KXIP youngster is closely keeping a tab on how Mitchell Starc bowls and fires in those yorkers.

“When I didn’t start playing, I used to follow Irfan Pathan. His hat-trick against Pakistan made me fall in love with his bowling. And I loved watching Wasim Akram but now I am following Mitchell Starc, the yorkers he fires in are what I love the most.” 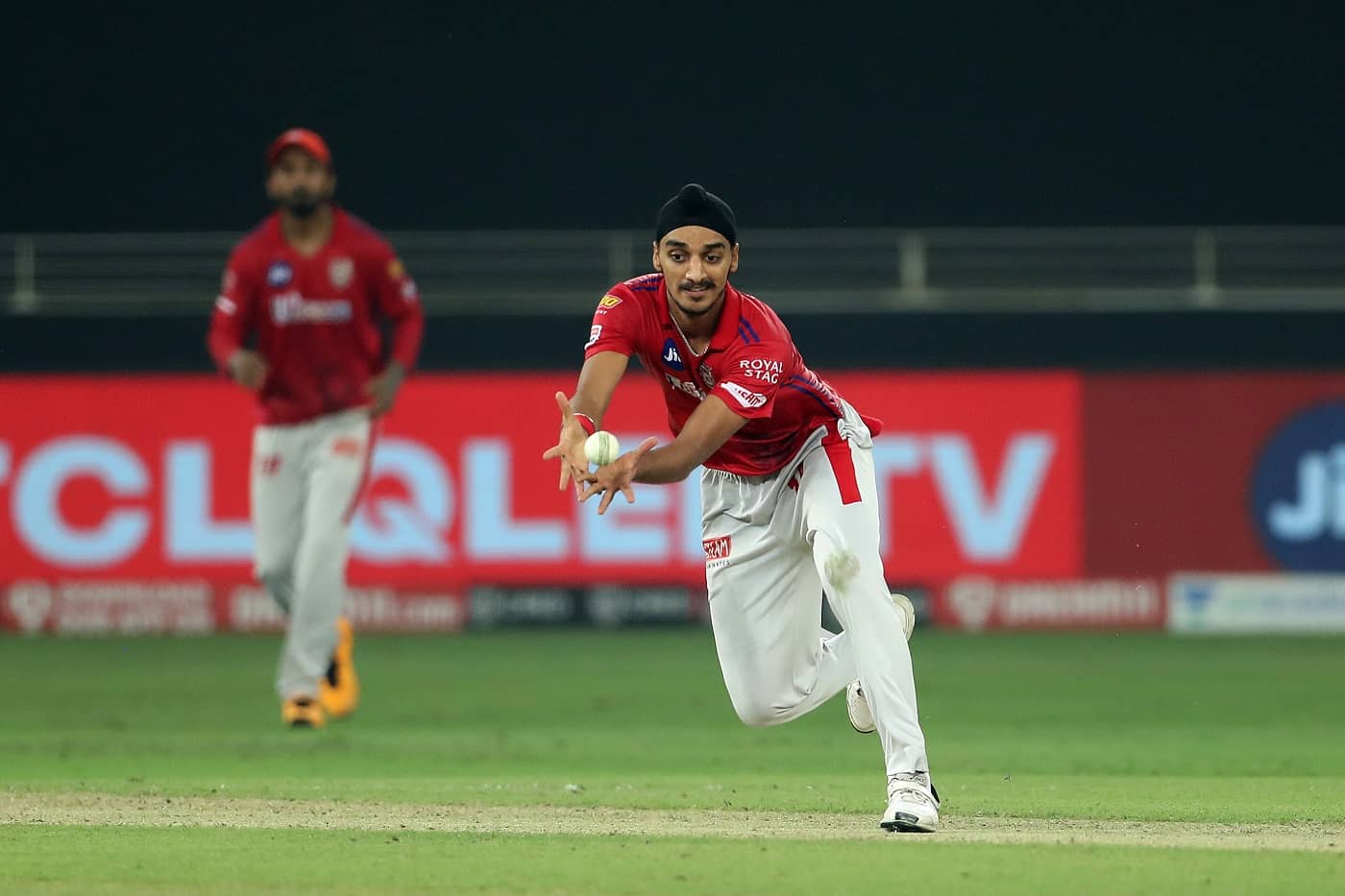 KXIP didn’t get off to the best of starts as they lost a few close matches. They aren’t in the best of position in the points table. However, things change quickly in the world of cricket and IPL is the pinnacle of twist and turns. Arshdeep thanked all the KXIP fans for supporting them while adding that they are ready to prove that they can do much better than what they did in the first phase of IPL.