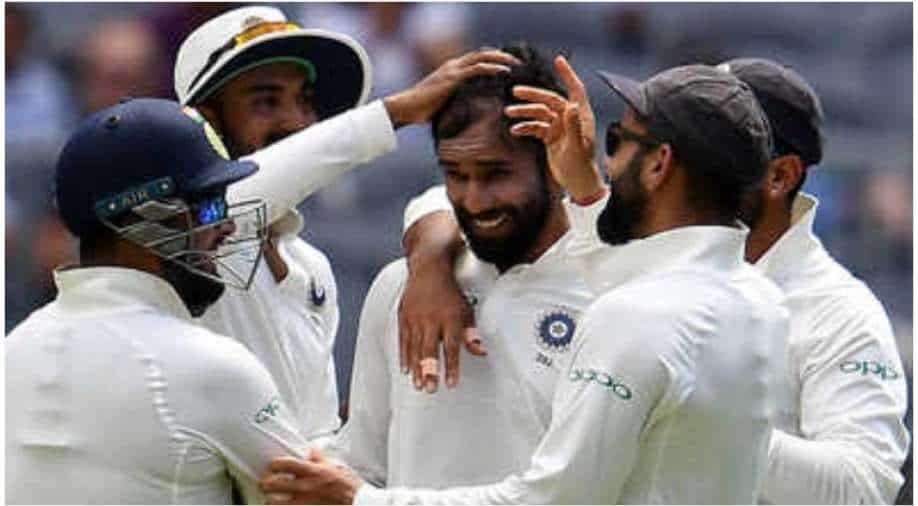 Not Iyer! Ex-selector names who should feature in SL Tests Photograph:( AFP )

In his brief Test career, playing 13 games so far, Hanuma Vihari has done reasonably well by playing some important and valuable knocks with the willow. He has chipped in with a few handy wickets as well and his off-spin might be a key factor in the Rohit Sharma-led Team India preferring him in the playing XI.

After the three T20Is, India is set to lock horns with Sri Lanka in the forthcoming two-match Test series, which gets underway on March 04. Before the commencement of the Test series, ex-Indian selector Devang Gandhi feels Indian cricket fans will see more of Hanuma Vihari in the playing XI with no Cheteshwar Pujara and Ajinkya Rahane.

Ahead of the series, the national selectors had dropped senior pros Pujara and Rahane along with Ishant Sharma and Wriddhiman Saha. With room in the middle and lower order, Gandhi feels Vihari 'deserves a fair run'. Gandhi also shared his batting order, which doesn't comprise in-form Shreyas Iyer.

"Firstly, Vihari has played only one Test at home and he, above everyone, else deserves a fair run. Secondly, if you see for India and India A, he has batted at No.5 abroad but in India, he can come in at No.6 when spinners will be in operation and the 'SG Test' ball becomes relatively old." He asserted, "Vihari has a fantastic record against spinners in Ranji Trophy and that's something the team management can exploit."

“If you see our top-order, Mayank, Rohit, Shubman and Virat are all right-handers. It's better if at No.5 we have a left-hander to get the left-right combination going followed by Vihari at No.6 and Ravindra Jadeja, again a left-hander at No.7. It could be the way forward," added Gandhi.

ALSO READ | 'I wondered how someone could...': Md Shami shares his first reaction on seeing pacer Jasprit Bumrah

In his brief Test career, playing 13 games so far, Vihari has done reasonably well by playing some important and valuable knocks with the willow. He has also chipped in with few handy wickets and his off-spin might be a key factor in the Rohit Sharma-led Team India preferring him in the playing XI.

However, it will be very difficult for the team management to look beyond Iyer, who was the Player-of-the-Series in the SL T20Is and second highest-run getter in the India-NZ Tests last year (his maiden series in whites).

The first Test will be held behind closed doors in Mohali whereas Bengaluru will host the second and final Test with a 50% crowd capacity.