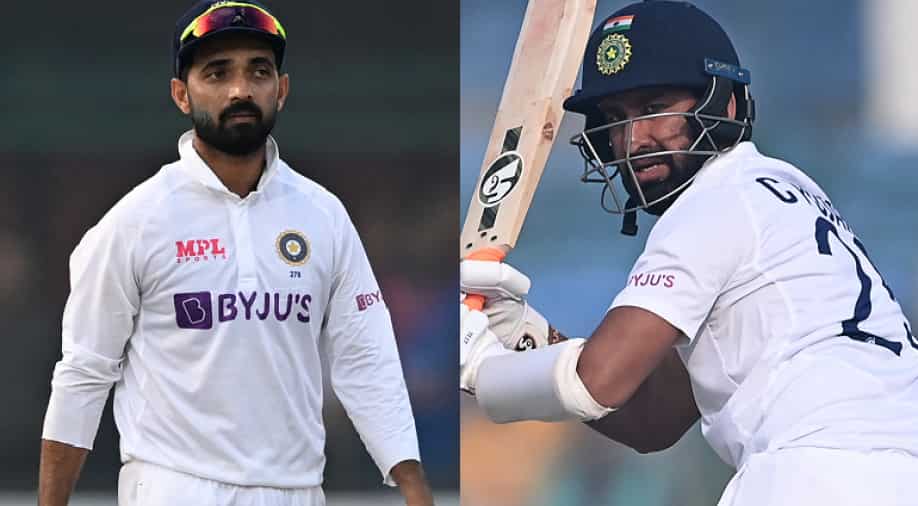 Will Rahane and Pujara make a comeback in the Indian Test team? Photograph:( AFP )

Former India cricketer Ajay Jadeja has made a bold claim regarding Cheteshwar Pujara and Ajinkya Rahane's future in Test cricket after the duo was dropped from India's Test squad.

Senior batters Cheteshwar Pujara and Ajinkya Rahane have both been dropped from India's Test squad for the upcoming series against Sri Lanka at home. The Chetan Sharma-led selection panel dropped as many as four senior players from the Test squad which was announced on Saturday.

Both Pujara and Rahane were struggling with their respective forms in the longest format and had been suffering from a lean patch with the willow for a while now. The duo failed to turn a corner in India's Test series against South Africa earlier this year and their disappointing show on the tour has resulted in their axing from the squad.

“Both are single-format players, and when you leave them out of that one format, I don’t see them coming back. I hope I am wrong because these are stalwarts. They have played 80-90 Test matches. There is enough talent that is around. The next generation that has come has pushed them," Jadeja said on Cricbuzz.

While he insisted Pujara and Rahane are unlikely to make a comeback in the Test team, Jadeja said the duo has been made a scapegoat after India's 2-1 series loss in South Africa. The former India cricketer said it is unfair for the selectors to drop the do after one series loss and that the two senior batters have been singled out after the defeat.

“It is sad. If it was done a year and a half ago, when India were still at the top and winning, I would have backed that decision. Dropping Rahane and Pujara after losing one series is unfair. Then you are singling out these two, and that’s not the way to build sides," said Jadeja.