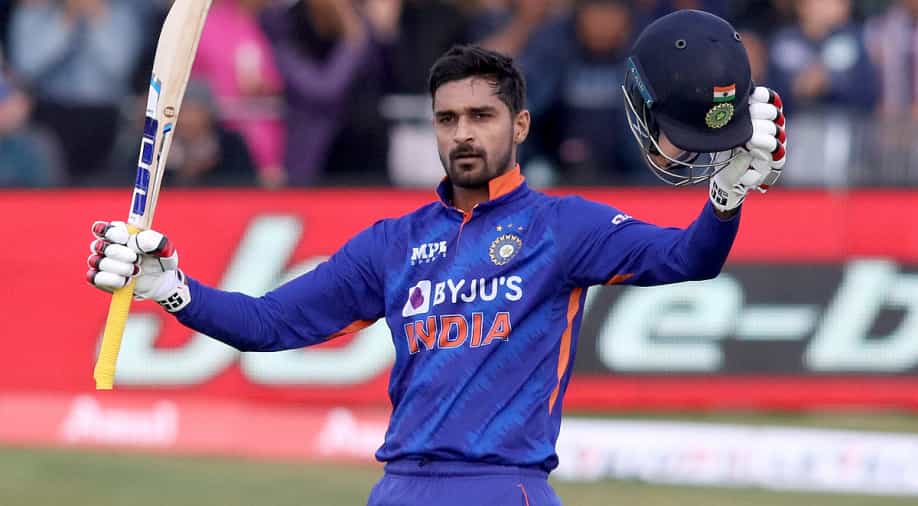 Deepak Hooda slammed his maiden T20I century as he combined with Sanju Samson to help India beat Ireland by 4 runs in the 2nd T20I and seal the two-match series 2-0.

Deepak Hooda hit a master-class maiden century as India survived a mighty scare before defeating Ireland by four runs in a nail-bitting high-scoring second T20 International to sweep the two-match series here on Tuesday. Hooda scored 104 off 57 balls to become only the fourth Indian to hit a T20 International ton, while Sanju Samson contributed 77 off 42 balls to power India to a mammoth 225 for seven after opting to bat.

Ireland took the chase to the last over with skipper Andy Balbirnie (60 off 37), Paul Stirling (40 off 18), Harry Tector (39 off 28) and George Dockrell (34 not out off 16) shinning bright but they eventually fell short as rookie India pacer Umran Malik defended 17 runs in the final over.

Opting to bat, Hooda showed he belonged to the big stage with his scintillating stroke play, both off the front and backfoot. While Hooda was elegant and at ease on the frontfoot, he was equally good on the backfoot, dispatching the ball over the midwicket boundary for a few sixes.

Hooda decorated his knock with nine fours and six hits over the fence. He was ably supported by Sanju Samson, who, opening the batting in place of injured Ruturaj Gaikwad, played second fiddle but grabbed his opportunity with both hands. Both Hooda and Samson's strokeplay down the ground were a treat for the eyes.

Ireland made a rollicking start to their chase, with Stirling and Balbirnie sharing 72 runs for the opening wicket off just 34 balls. Stirling went hammer and tongs from the world go. Stirling took Bhuvneshwar Kumar to task, hitting the bowler for a six and three boundaries to pick up 18 runs from the opening over.

Stirling then clobbered skipper Hardik Pandya for a six. The opening duo continued their attacking display to notch up Ireland's 50 for no loss in just four overs. Leg-spinner Ravi Bishnoi broke the dangerous-looking 72-run opening stand in the sixth over, cleaning up Stirling.

In his next over, Bishnoi had Balbirnie stumped by Ishan Kishan but it turned out to be a massive no-ball. Balbirnie utilised the chance and clobbered all the Indian bowlers to all parts of the ground to keep Ireland at par with the asking rate.

He was particularly severe on young pace sensation Malik, dispatching the pacer's short deliveries over the fence as Ireland brought up their 100 in nine overs for the loss of two wickets. Balbirnie notched up his sixth T20 International 50 off 34 balls and continued his onslaught for some time before being caught by Bishnoi off Harshal Patel.

But Tector, Dockrell and Mark Adair (23 not out off 12 balls) kept Ireland in the hunt till the last ball from which the hosts needed a six to win the match and draw the series. Adair, however, could manage just one run as Malik lived up to his captain's call.

Earlier, India did not have the best of starts as they lost Ishan Kishan (3) early. The left-handed opener once again wasted an opportunity, nicking a Mark Adair delivery to Lorcan Tucker behind the stumps in the third over. Hooda and Samson joined hands and the duo batted effortlessly, albeit handing two difficult chances, to share 176 runs off just 85 balls to lay the foundation for India's huge total.

It was a one-way traffic after Kishan's dismissal as Hooda and Samson toyed with the Irish bowlers and did not let them settle down. Except for a difficult chance which Paul Stirling dropped at extra off in the eight over, Hooda played a perfect knock.

Samson too was handed life in the ninth over when leg-spinner Gareth Delany dropped a difficult caught-and-bowled chance. Samson too played some delightful strokes, particularly off the backfoot during his half-century knock. He, however, was cleaned up by Adair in the 17th over.

Hooda brought up his maiden T20I century off 55 balls with a single to join the likes of Rohit Sharma, KL Rahul and Suresh Raina in the elite club of only four Indian centurions in the format.

Once Hooda departed at the team score of 212, Surya Kumar Yadav (15) and skipper Hardik Pandya (13 not out) tried to accelerate the scoring but failed as India lost three wickets for the addition of just 14 runs in the last two overs.