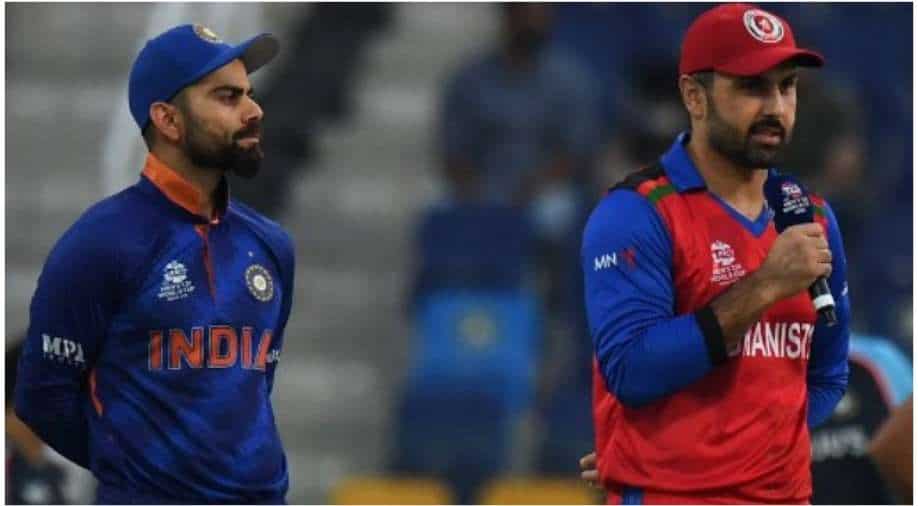 A video has surfaced where Mohammad Nabi told Virat Kohli that Afghanistan would bowl first just before the toss. However, Rashid Latif and David Gower have shunned all conspiracy theories with regard to the toss controversy.

India and Afghanistan locked horns with each other on Wednesday (November 3) in match 33 of the T20 World Cup 2021 edition, being held in the UAE. In what was a must-win game for Team India, Virat Kohli & Co. thrashed Mohammad Nabi-led Afghan line-up by 66 runs at the Sheikh Zayed Cricket Stadium, Abu Dhabi.

Being asked to bat first, India rode on scintillating half-centuries from openers Rohit Sharma (74) and KL Rahul (69) as they posted 210-2 and, later, restricted Afghanistan to 144-7, courtesy Mohammed Shami's 3-fer and R Ashwin's 2 for 14. With this win, India remain alive in the semi-finals race, however, they need to win their remaining two games convincingly and also hope for other results to favour them in order to enter the last four.

Despite Team India's clinical performance, some Pakistani fans accused BCCI of fixing the India-Afghanistan tie. Moreover, the toss controversy erupted as a video surfaced where Nabi told Kohli that his side will bowl first on winning the toss, just a few moments before the coin toss.

ALSO READ | Rohit, KL Rahul or Pant? Sehwag suggests who should be India's next T20I captain after Virat Kohli

Former cricketers David Gower and Rashid Latif have now given an explanation, putting the conspiracy theories to bed. "To me, there's nothing to worry about," said Gower on Game on Hai show at PTV Sports, where he had other panelists in Rashid Latif and Umar Gul. "These things can become serious very quickly if you let them. But I am not the only person with an opinion in this room, I know that," he added.

To this, former Pakistan captain Latif asked Gul, "What did you see?" Gul said, "I think Nabi said we will bowl first. Latif then explained, "When a toss takes place between two captains, one captain tells the other what he wants to do," explained Latif. "So Nabi told Kohli 'we will bowl first'. However, later you have to say the same thing officially, so he repeated it."

Talking about Kohli-led India, they need to win both their remaining games by huge margins -- versus Scotland and Namibia -- and hope for Afghanistan to beat New Zealand by a slender margin. The 2016 semi-finalists are already on the brink of an early elimination and need luck as well as some clinical performances to get their campaign back on track.