Cricket: 'We can push on with all three results still possible': Tim Southee on 1st Test vs England 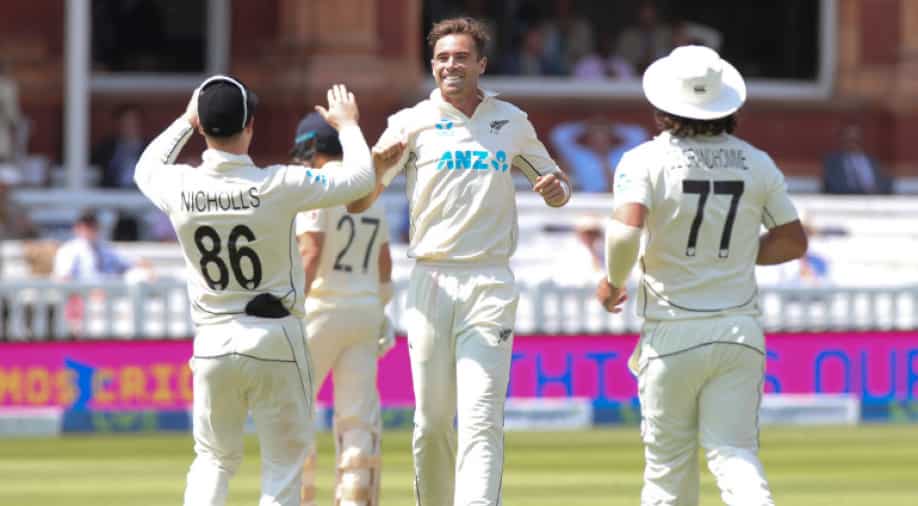 Tim Southee trusts, regardless of there being no cricket on day three, that they are in a position where each of the three outcomes are conceivable against England.

Tim Southee has said that, regardless of there being no cricket on day three, they are in a position where each of the three outcomes are conceivable against England. The 32-year-old feels the Kiwis can push for success on the last day of the first of the two-Test series against England, being played at Lord's.

The Black Caps posted a serious first-innings all out of 378, on account of an incredible double century from debutant Devon Conway. England appeared to be in a decent situation to draw nearer to New Zealand's absolute at one phase, however, Tim Southee came up with a spell of exemplary swing bowling.

The veteran returned figures of 6-43 and set off an England collapse, giving the Kiwis a significant 103-run lead. Toward the finish of play on day four, Tim Southee opened up on New Zealand's odds of removing a positive outcome from this apparatus.

"If we'd have turned up at the start of the day and told we were going to walk off with the position we're in now we'd have been pretty happy. But the England side don't just roll over. Who knows what may happen but it's great to be in a position where we can push on with all three results still possible" - Tim Southee opined.

Tim Southee demonstrated through his splendid bowling show that he is as yet perhaps the best example of swing bowling in world cricket. His six-fer assisted him with getting the Lord's distinctions load up for the second time in his career.

The 32-year-old ventured up without Trent Boult and aided the Kiwis take the ascendency in the Test.

"Any time you contribute to the side and do your job it's very satisfying and I guess it's a little bit sweeter at such as special grounds as Lord's," Tim Southee signed off.

ALSO READ: Cricket- Joe Root's captaincy that should be cause for concern: Ian Chappell

New Zealand will continue on the last day with a lead of 170 runs and with eight wickets close by. In the event that they figure out how to score rapidly and set England a precarious absolute to pursue, we may be in for an intriguing last day's play.