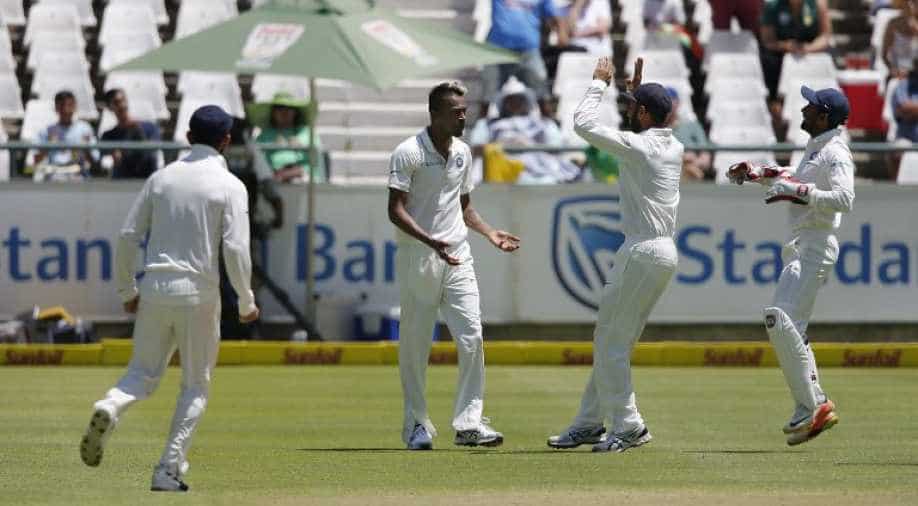 India bowlers are going extra miles to prove their abilities even in adverse conditions. As the day goes on, the South African side is falling apart one by one.

It seemed that the shocker start did not hamper much the middle order batting of South Africa as AB de Villiers and captain Faf du Plessis looked comfortable with the bat even after the failure of the top order but Indian pacers hit soon.

When both the players were trying to give a rhythm then Jasprit Bumrah took AB de Villiers' wicket. He contributed 65 runs of 84 for his team but could not stay longer on the pitch as stunning Bumrah got him with a full length around off stump delivery. ABD looked positive throughout his innings but the South African 'stars' are not shining brightly in the first Test match.

Soon after that, in 35th over, Pandya got another important wicket. He took the skipper on a short ball and Saha caught it behind the stumps. A poor and unnecessary shot by Faf du Plessis made him walk to the pavilion after scoring 62 runs.

India's gamble of playing with four fast bowlers paid off as Bhuvneshwar send the opening batsman Dean Elgar and Aiden Markram back to pavilion also he took the crucial wicket off Hashim Amla.

South Africa was reduced to 12/3 in the first few minutes of the game at Newlands, Cape Town.