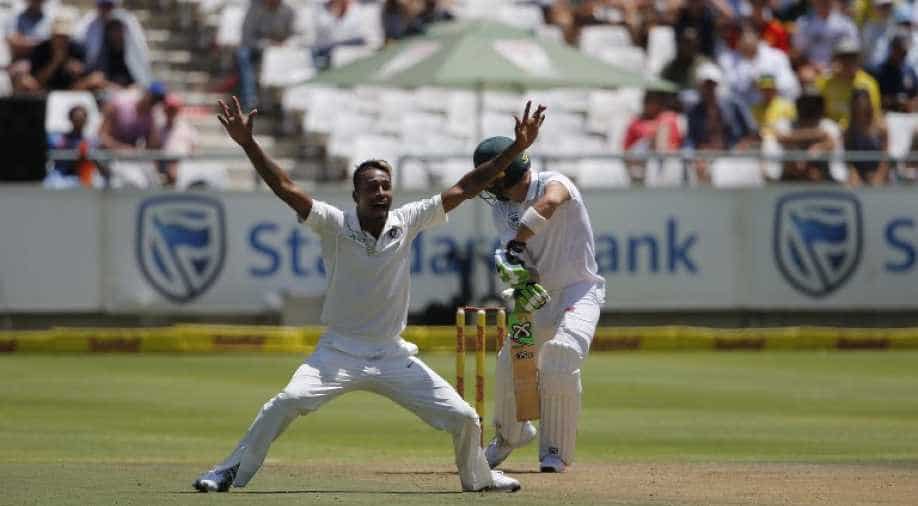 Hardik Pandya appeals for a Leg Before Wicket (LBW) during Day One of the cricket First Test match between South Africa and India. Photograph:( AFP )

South Africa hit back at the end of Day-1 picking up openers Dhawan and Vijay in quick succession including captain Kohli after being shot out for 286 in the Newlands Test on Friday.

Ravichandran Ashwin picked up the last wicket South African wicket as Indian pacers kept the hosts on the backfoot throughout the day.

Bhuvneshwar Kumar struck in the 45th over of the day dismissing Quinton de Kock for 43 as South Africa lost their sixth wicket at Newlands.

Kumar's strike took his tally to four wickets as South Africa struggled to 206/6.

Earlier, Pandya took the vital wicket of F du Plessis as India took a stranglehold of the first Test.

South Africa were reduced to 160/5 after F du Plessis nicked an edge to keeper Saha with the hosts unable to cope with the Indian pace attack.

Bumrah stuck after lunch on the first day in the 33rd over bowling out South African captain de Villiers to take his maiden Test wicket as India kept the hosts on the backfoot at Newlands.

In-form Indian bowler Bhuvaneshawar Kumar struck in successive overs taking the wicket of Markram lbw for just 5 as South Africa were reduced to 12 for 3 in the first few minutes of the Test match.

The Indian swing bowler stuck in the next over taking the prized wicket of Amla as he edged to the keeper for just 3.

India's gamble of playing 4 fast bowlers paid off as Bhuveneshwar struck in the third ball of the match taking the wicket of Elgar caught behind by Wriddhiman Saha.

AB de Villiers and Faf du Plessis battled their way to take South Africa to 107/3 at lunch. de Villiers led from the front remaining unbeaten on 59 in just 65 balls hitting 11 boundaries with Plessis giving him company at the other end batting on 37 which contained seven strikes to the fence.

India's gamble of playing 4 fast bowlers paid off as Bhuveneshwar struck in the third ball of the match taking the wicket of Elgar caught behind by Wriddhiman Saha.

Ajinkya Rahane, Ishant Sharma, Parthiv Patel, Bhuvneshwar Kumar, Lokesh Rahul has been dropped out for the game and Ravindra Jadeja continues to recover from flu.

Jaspiprit Bumrah is making his Test debut. He has proved himself with the ball in the limited overs, especially in death overs. He is quite comfortable in taking pressure which is much needed in today's game.

South Africa is not known for producing spin-friendly tracks. Indian pacers must create enough rough on the Newlands pitch for R Ashwin to save runs.

On the other hand, South Africa will open with  Dean Elgar and Aiden Markram. Snubbing all the rumours regarding injuries, Dale Steyn is in playing XI where Temba Bavuma is dropped for the first Test match.

RR vs GT: Yuzvendra Chahal set to script historic feat, on the brink of breaking an all-time record in IPL