Cricket: 'Be yourself': Advice Suryakumar Yadav gave himself ahead of international debut 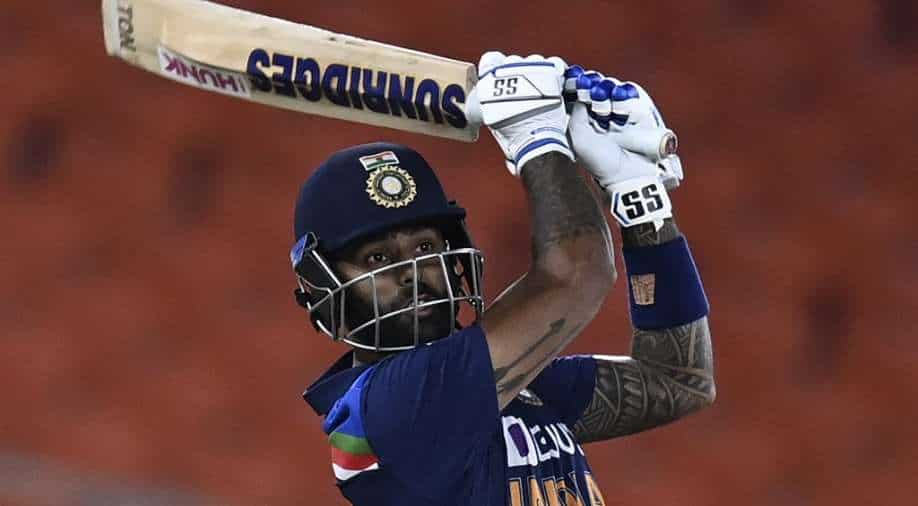 Suryakumar Yadav has revealed that he was so eager to take strike for the first time in international cricket that he ran in to bat.

Suryakumar Yadav has revealed that he was so eager to take strike for the first time in international cricket that he ran in to bat.

Suryakumar Yadav made his India debut in the second T20I against England in Ahmedabad in March this year. However, he didn't get the opportunity to bat in his debut. He was dropped for the following match, before being reviewed for the fourth T20I. Sent in to bat at No.3 as England chose to take the field first the 30-year-old hit an appealing 57 from 31 balls.

''When I padded up and came to the dug-out, I was nervous, and it should be that way if you don't get nervous, how would you perform''.

''When I was going inside, everything started running in my mind, what I have done when I bat at three. I got my answer when I said to myself 'don't do anything different, do the same thing – be yourself, that's it. I have reached this point by doing the same things" - he said.

“If you must have seen, I was very excited at that time. Obviously, I wasn’t happy because Rohit Sharma had just got out. But when it was going in, I was so excited, I ran in to bat. I had waited for a long time for this opportunity. Sitting in the dressing room, I had thoughts like - when will the match start? When will my turn come to bat? When I wore my pads and came out to sit in the dugout, I was a little nervous. It is important to be nervous. If you are not nervous, how will you go in and perform?” - he added.

Suryakumar Yadav added that at the hour of taking the strike, he adviced himself to adhere to the regular game that has brought him achievement, and not have a go at anything unique.

Suryakumar Yadav hit six fours and three sixes in his thump prior to being gotten by David Malan off a breadth shot under questionable circumstances. Replays were uncertain with regards to whether the fielder had taken the catch neatly and accordingly the soft signal of 'out' remained.

In a fantasy start, Suryakumar Yadav hit the first ball he faced in international cricket for a six, with Jofra Archer being the bowler. The batsman clarified that it was no accident as he had examined Jofra Archer's bowling pattern in the Indian Premier League.

"People often ask me about that first-ball six off Jofra Archer. It was important to stay calm and I knew what he had been doing in the IPL. How he comes hard at the batters and what kind of deliveries he bowls to a new batsman at the crease. Back of the mind, I knew he would bowl that short ball delivery. Thankfully, he did. I don’t know what would have happened had he bowled a different ball. But it all worked out well in the end and I am happy” - he added.

Suryakumar Yadav was announced as the Man of the Match for his thump as India crushed England by eight runs. He scored 32 runs off 17 balls in the following T20I as the hosts secured the five-match series by a 3-2 edge.