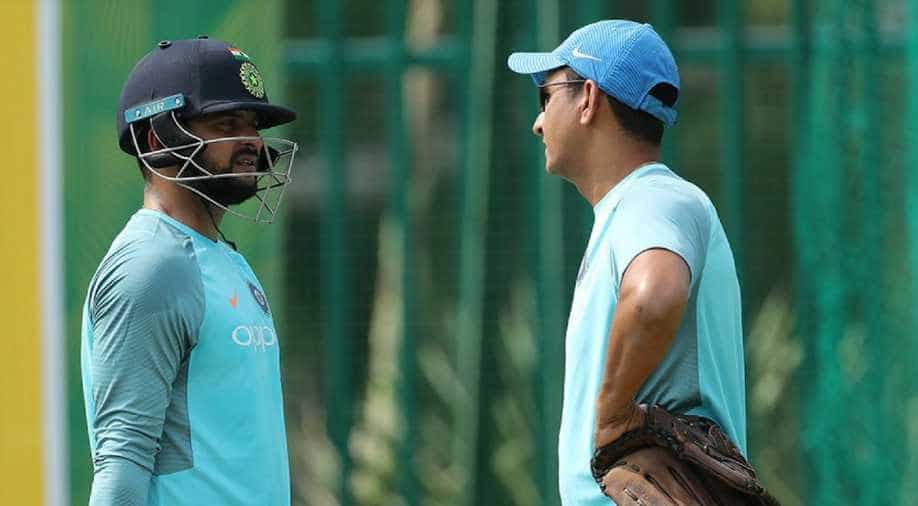 Suresh Raina in a chat with bowling coach Sanjay Bangar during the net session. Photograph:( Twitter )

India's tour to South Africa has entered in the final phase where both the teams will meet for a three-match T20 International series which will start from today at the Wanderers, Johannesburg.

For India, the major change is that they have called back Suresh Raina.

On his comeback, Raina told BCCI TV, "I have worked really hard for two years and coming to the Indian team feels like I am playing first time in India jersey"

"I was working hard for my game and waiting for the chance to come and Ravi Bhai (head coach Ravi Shastri) really supported me a lot and also Virat."

"I am very happy about it, I have worked really hard, played each and every game in domestic cricket," he further added.

Raina is desperate to rejoin Indian cricket team ahead of World Cup 2019, and his performance in the T20 against South Africa will act as a decider.

How's that for a @ImRaina flourish! #TeamIndia #SAvIND pic.twitter.com/O0KJR4ldww

"Whenever you play for your country, you desire to perform well. I am very blessed to represent my country, Raina told to a BCCI correspondent.

Raina mentioned "I am a very positive person" and said, "Get back to my Indian jersey and win games for my country."

Surest Raina praised Indian skipper Virat Kohli and said, "Virat has shown immense support to each and every player."

"Virat is a quality leader and gives importance to each and every person," he added.

Snapshots from #TeamIndia's stint at the nets ahead of the 1st T20I at The Wanderers #SAvIND pic.twitter.com/PmeCwRjvFs

Suresh Raina remained out of India cricket team for more than a year and worked hard to register a comeback which most of the players fail to do.

He summarised his chat with the BCCI correspondent by saying, "Setbacks give lessons and make you tough."