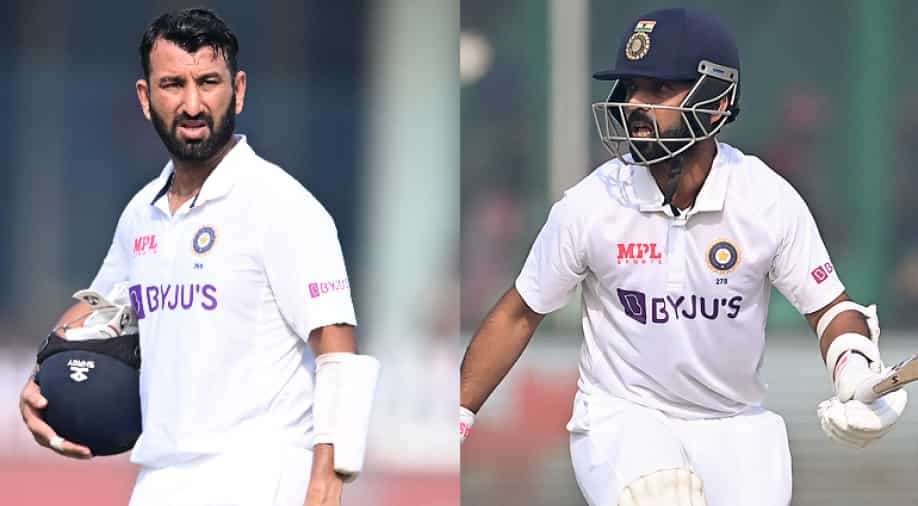 Rahane and Pujara have been dropped from India's Test team for Sri Lanka series. Photograph:( AFP )

Chief selector Chetan Sharma has explained why senior batters Cheteshwar Pujara and Ajinkya Rahane have been dropped from India's Test squad for the upcoming Sri Lanka series at home.

The Chetan Sharma-led selection panel on Saturday (February 19) announced India's Test and T20I squads for the upcoming home series against Sri Lanka. India will play three T20Is followed by a two-match Test series against Sri Lanka at home starting from February 24. While there weren't any surprises in the T20I squad, a number of senior players were dropped from the Test team.

Besides appointing Rohit Sharma as India's permanent skipper in Tests, the national selectors made a bold call by dropping the Cheteshwar Pujara, Ajinkya Rahane, Ishant Sharma and Wriddhiman Saha from the squad. While Pujara and Rahane's poor form had been under the scanner for a while now, Ishant and Saha have had to deal with a lot of fitness issues and have been replaced by youngsters in the side.

Explaining the reason behind dropping Rahane and Pujara, who once used to be integral members of the Indian Test team, Chetan Sharma, the chairman of the selection panel said it was a decision taken after a lot of deliberation. Sharma said the selectors want to give chances to other players while Pujara and Rahane have been asked to perform in the ongoing Ranji Trophy.

"We have deliberated a lot on them. We decided not to consider them for the SL series. We asked them to play Ranji. For these two matches, we decided to give chance to others. They can still make a comeback. Ajinkya got a hundred in the Ranji match. It is a bad phase. It is very important for the selectors to manage them," Sharma said.

While many are expecting this to be the final nail in the coffin for all four senior players as far as their Test careers are concerned, Sharma revealed they can still make a comeback in the side on the basis of their performances in the Ranji Trophy.

"We have informed them that Ishant and Wriddhi will not be considered for the two-match Test series against SL. But the door is not closed to them. We have requested all four to play the Ranji Trophy," said Sharma.

Rahane, Pujara and Ishant are all playing for their respective state teams in the Ranji Trophy while Saha has been dropped from the Bengal team. Rahane recently impressed on his return to domestic cricket as he slammed a century for Mumbai in their Ranji Trophy clash against Saurashtra earlier this week.

It was Rahane's first hundred after 417 days as his last ton came against Australia in the Melbourne Test in 2020. Rahane will be hopeful of regaining his form in the domestic tournament and reclaim his spot in the Indian Test team.