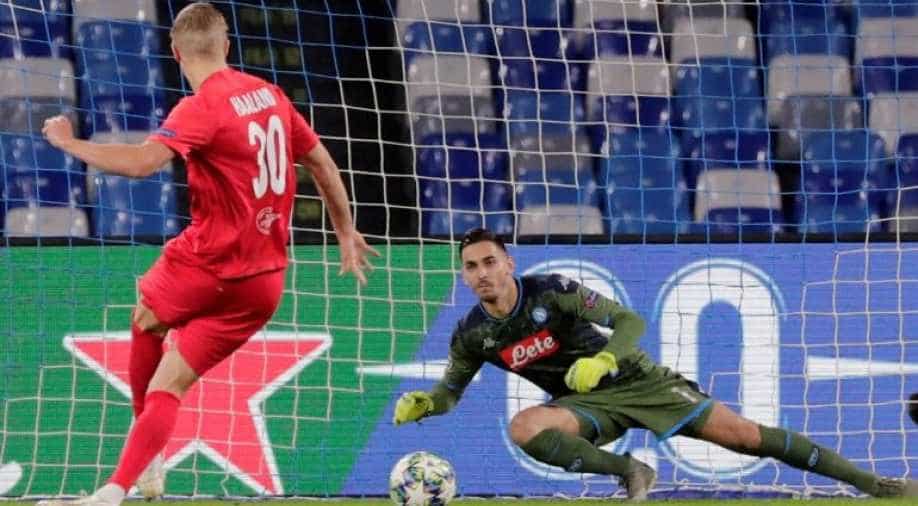 Napoli, who had 30 shots on goal but only three on target, dropped to second in the group with eight points, one below Liverpool, while Salzburg are third with four points.

Napoli gave another erratic performance as they hit the woodwork twice, wasted a hatful of chances and looked shaky at the back in a 1-1 Champions League draw at home to Salzburg on Tuesday.

Salzburg's teenage forward Erling Braut Haaland continued his prolific season by putting the Austrian champions ahead from a penalty, his seventh goal in four games in Group E and his 23rd of the season in all competitions.

Hirving Lozano equalised with a superb strike one minute before halftime but, despite carving out more openings in the second half, Carlo Ancelotti's side missed their chance to book a knockout-stage place with two games to spare.

Napoli, who had 30 shots on goal but only three on target, dropped to second in the group with eight points, one below Liverpool, while Salzburg are third with four despite being the group's top scorers with 12 goals.

Both sides missed early chances before Napoli defender Kalidou Koulibaly gave away a penalty with a clumsy tackle on Hwang Hee-chan and 19-year-old Norwegian Haaland continued his remarkable scoring run from the spot in the 11th minute.

Napoli, winless in four games, continue to misfire in the attack.

Jose Callejon saw a header bounce off the far post and Lorenzo Insigne twice swept the ball over from similar positions near the edge of the penalty area as he failed to keep his composure.

Napoli finally levelled with their 16th attempt on goal. Insigne slipped the ball inside to Lozano who was surrounded by Salzburg defenders but the Mexican still managed to score with a snooker-like shot from the edge of the area which found a tiny gap between Carlos Coronel and his near post.

The pressure continued in the second half as Lozano flashed a shot over the bar and there was a lucky escape for Coronel when Insigne caught him napping with a 30-metre lob which struck the crossbar, hit the goalkeeper's head and went out for a corner.

Insigne sent another effort wide after a clearance was sent straight to his feet and Fernando Llorente headed wide from a corner, leaving Ancelotti with plenty to ponder.