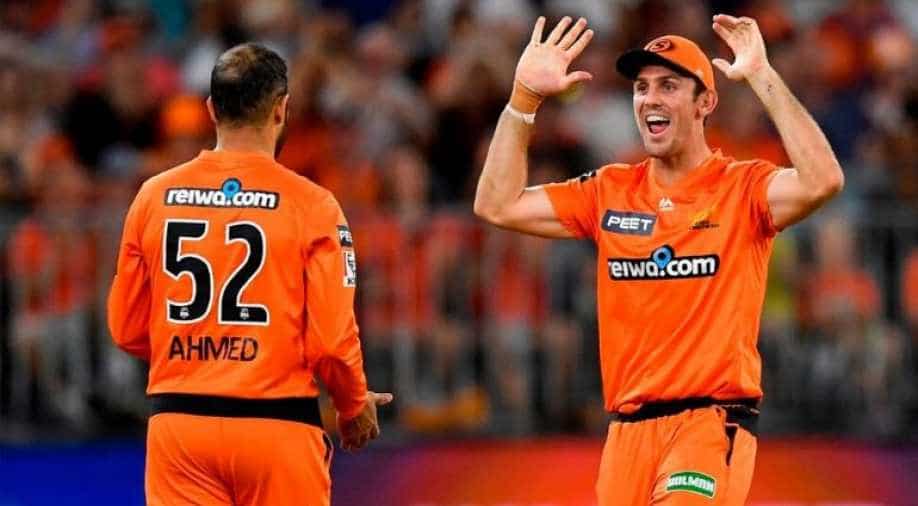 He scored unbeaten 93 runs off 41 balls, this included 3 fours and 8 sixes.

Marsh, who injured his knuckles after punching through a wall, a month ago, hit 8 sixes as he scored unbeaten 93 runs off 41 balls. The innings included three fours too.  Marsh's incredible knock ensured that Perth Scorchers pose a massive total of 213 runs.

Cameron Bancroft's 41 runs off 29 balls also helped Scorchers to post a massive total. A 100-run partnership between Bancroft and Marsh did not give Brisbane any chance to make a comeback in the match.

In the second innings, Brisbane Heat started off well after Tom Banton gave his team a decent start.

Joe Burns and Ben Cutting tried to stabilize the innings but Heat's hopes died when Cutting was dismissed after getting caught by Tim David.

The remaining batsmen fell like ninepins and the innings ended with 179 runs for the loss of eight wickets with Tom Banton top-scoring with 55 runs. Joe Burns scored 37 runs.

Perth Scorchers are fifth in the points table with eight points, Brisbane Heat are just above Perth Scorchers with equal points, but they are ahead due to the net run rate.