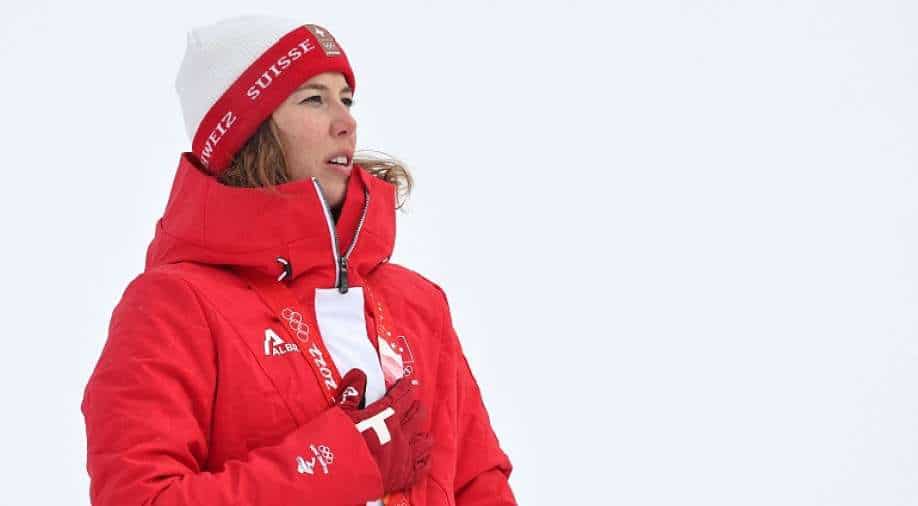 Switzerland's Michelle Gisin retained her Olympic title in the women's combined on Thursday as American Mikaela Shiffrin yet again failed to finish.

Switzerland's Michelle Gisin retained her Olympic title in the women's combined on Thursday as American Mikaela Shiffrin yet again failed to finish.

Gisin won gold with a total time of 2:25.67, a comfortable 1.05 ahead of compatriot Wendy Holdener. Italy's Federica Brignone finished in the bronze medal position.

Shiffrin was a strong favourite, even after her ill-fated performances at these Games, but for the third time here had the letters DNF - Did Not Finish -- next to her name.

She was well placed as fifth fastest after the morning's downhill leg but, returning to the Ice River course where she had skied out in both the giant slalom and slalom, Shiffrin missed a gate and incredibly skied off the course yet again.

"I didn’t make it to the finish again, and like 60 percent of my DNF rate has happened at this Olympic Games," said the American who came into the Games as the star of the sport and the great American medal hope.

"I didn’t feel pressure there. I mean there is always pressure but I just felt loose and relaxed and like I knew my plan, focused and good skiing - I was doing it and it still didn’t work. That is what it is," she said.

The six-times world champion has had 47 World Cup victories in slalom but that experience has counted for precious little in Beijing.

"47 different times I had this feeling - the right balance of intensity, focus, the feeling I had on my skis - it always worked.

"It was always good, fast skiing but I never had an issue not finishing and especially not that early. So it is just a little bit of a mind-boggling event I guess".

Shiffrin won gold in giant slalom at Pyeongchang 2018 after winning the slalom title at Sochi 2014. She also claimed the silver medal in the combined four years ago.

The 26-year-old has competed in every individual event in Beijing but her results have been way below all expectations. She was only able to complete the speed events, finishing ninth in the super-G and 18th in the downhill.

But while Americans scratch their heads over Shiffrin's sudden loss of form, the Swiss are basking in their domination of the sport.

Gisin's victory produced the fifth gold for the Swiss team at these Games and the second medal for both Gisin and Holdener.

"I didn't think I could put a slalom run together like this after these three weeks, it was so intense."

Three of the Swiss Alpine team's golds have been for women and the country's Alpine medal tally in Beijing stands at nine in total, including a bronze in super-G for Gisin while Holdener finished third in slalom.

The pair had both medalled in the combined in Pyeongchang with Holdener taking bronze as Gisin triumphed.

Czech Ester Ledecka finished fourth, narrowly missing out on an Alpine medal to go with her snowboard gold in the parallel giant slalom.

Four years ago, Ledecka made history when she became the first athlete to win gold in both her snowboard event and Alpine, where she won in super-G.