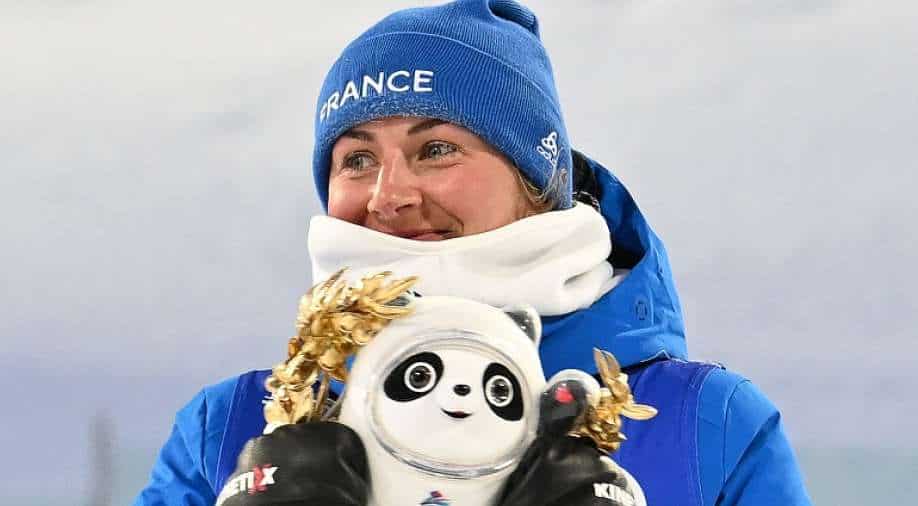 Justine Braisaz-Bouchet of France blaze to victory in the women's Olympic 12.5 km mass start on Friday, the final women's biathlon race of the Games.

Justine Braisaz-Bouchet of France managed the rough shooting conditions brilliantly to hold off a twin Norwegian challenge and blaze to victory in the women's Olympic 12.5 km mass start on Friday, the final women's biathlon race of the Games.

The race was brought forward from Saturday because of the weather but the wind played a decisive role in the destination of the medals.

The Norwegian pair set the pace with Roieseland and Eckhoff both shooting clean on their first two prone visits, despite the bitterly cold wind whistling across the range and rattling the red guide flags.

The pair opened up a lead of 33 seconds but that vanished at the first standing shoot as the wind suddenly picked up and caused chaos on the leaderboard.

The Norwegians racked up costly misses, and took a long time about it, and had to embark on mentally and physically demanding 150m penalty laps.

Braisaz-Bouchet made the most of the window of opportunity at the third shoot to take the lead, quickly increasing it to 15.5 seconds over Roieseland by 8.4 km.

By the time the leading group made it to the range for the final time the wind was even more treacherous, and though Braisaz-Bouchet missed her first shot, she hit her next four and in quick time, to emerge with her lead increased to 48.5 seconds as all her rivals struggled to find the target.

The world number seven was able to ease home 15.3 seconds ahead of silver medallist Eckhoff and 34.9 ahead of Roieseland. and claim France's first medal in the mass start, which has now been won by five nations in its five appearances at the Olympics.

"I can't realise what happened," Braisaz-Bouchet said. "In the first weeks of the Olympics I did not have the equipment or the shape, I don't know what happened, why I was so slow on the track, but I dealt with it.

"Today I was very serene and calm. During the first standing shoot, I said to myself: 'OK, I have good skis, I am in good shape, whatever happens, happens' and in the last shooting round, I was very calm.”

Eckhoff said: "The standing shooting conditions were very tough, it was very challenging so it is great fun to come in in second place - a personal best for me."

Roeiseland already had three golds and a bronze in her suitcase and had no complaints about collecting another "lesser medal".

"It could not have gone better for me today," she said. "I felt tired so to make it to the podium at all is great. Today bronze tastes like gold.

"The standing shooting was very challenging, a lot of movements. I tried the best I could so I was satisfied with the result given the circumstances and it's great to be sharing the podium with Tiril."

Having come away from Pyeongchang with two silver medals, Roeiseland, a multi-world champion, said Beijing had exceeded her expectations.

"I dreamt of Olympic gold and it has been more than I thought possible," she said.

"I will remember it for the rest of my life - these have been fantastic Olympic Games."