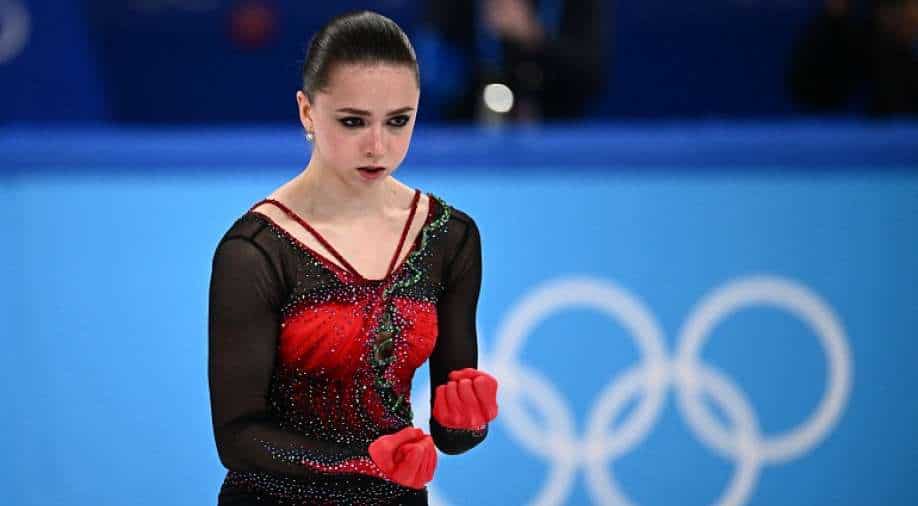 Valieva tested positive for a banned heart drug after the national championships on Dec. 25 Photograph:( AFP )

Russian teenager Kamila Valieva surprised the figure skating world by stumbling into fourth place in the women's singles event on Thursday, ensuring the Olympic medal ceremony could go ahead at the Beijing Games.

Her compatriot Anna Shcherbakova took gold with a total score of 255.95.

Fellow Russian Alexandra Trusova was second at 251.73 and Japan's Kaori Sakamoto came in third with 233.13.

Valieva, 15, wearing a sparkling black and red dress complete with bright red gloves, landed her opening quad, but faltered after her triple Axel, the first of a number of stumbles in the free skate routine to Maurice Ravel's "Bolero".

She threw her hands forward in frustration after her routine.

In the stands, loud cheers and applause greeted her arrival on the ice. Fans chanted her name after her stumble.

In a high-octane routine, Trusova attempted five quads, stepping out on at least one. She scored a season best 177.13 in the free skate. Shcherbakova attempted fewer quadruple jumps, but had fewer errors.

Valieva tested positive for a banned heart drug after the national championships on Dec. 25 but the result was not revealed until Feb. 8, the day after she helped the ROC win the team competition.

Valieva was only cleared to compete in the women's single event by the Court of Arbitration for Sport (CAS) on Monday.

She is one of the youngest athletes to have a positive test revealed at the Olympics, prompting questions about the role of the adults around her and the continuing scourge of Russian doping in international sport. It has also fueled a debate over raising the age limit for figure skating.

She was more than a month younger than Valieva when she won the women`s event in 1998 in Nagano, Japan, becoming the first to land a triple loop-triple loop in the women`s competition.