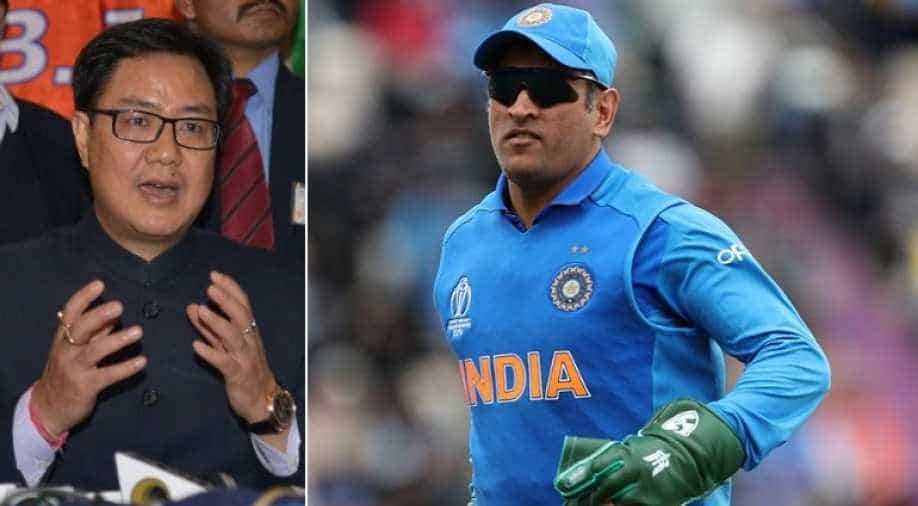 'MS Dhoni's identity is the country's identity, the army's identity and it is not politics. So, BCCI should stand with Dhoni,' Rijiju said

Sports Minister Kiren Rijiju on Friday said the Board of Control for Cricket in India (BCCI) should stand with MS Dhoni on the gloves controversy as it has nothing to do with politics.

"I am hopeful that BCCI will take up this matter with ICC and will solve this matter. MS Dhoni's identity is the country's identity, army's identity and it is not politics. So, BCCI should stand with Dhoni," he told reporters.

Rijiju said the government does not intervene in the affairs of the sports bodies as the bodies are autonomous and independent.

"I would like to say very clearly that the government does not intervene in the affairs of the sports bodies. BCCI or any sports federation, they are autonomous and they run their affairs independently," he added.

Dhoni was seen donning a regimental dagger insignia of the Indian Para Special Forces on his wicketkeeping gloves during India's World Cup 2019 opening match being played against South Africa in Southampton on Wednesday.

Rijiju also urged BCCI that they should put forward their views while keeping people's emotions in mind.

"The incident that took place during the World Cup is a thing related to India's reputation, I want to say that BCCI, on their level, should take up the matter with ICC and keeping Indian citizen's emotions in mind, they should put forward their views properly," Rijiju said.

Rijiju concluded saying that if necessary, BCCI should inform the government.

"I would like to request BCCI to take up the matter with ICC properly and if necessary inform the government accordingly," he said.