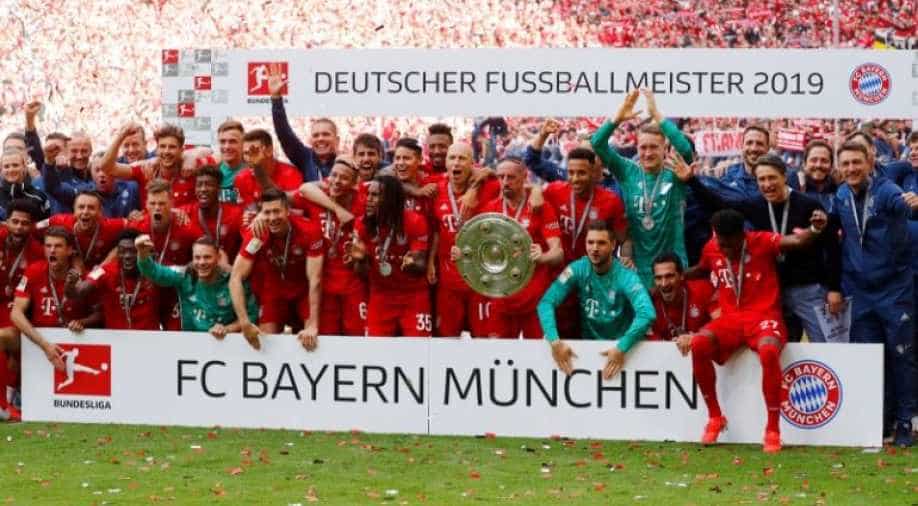 Bayern Munich celebrate with the trophy after winning the Bundesliga. Photograph:( Reuters )

The blockbuster Bundesliga curtain-raiser in Dortmund once more pits Germany's top clubs together after Bayern held off a spirited Dortmund challenge to land a seventh straight league title on the final day of last season.

Bayern Munich resume their power struggle with Borussia Dortmund on Saturday for the German Super Cup with the Bavarians chasing Manchester City star Leroy Sane to reinforce their squad.

The blockbuster Bundesliga curtain-raiser in Dortmund once more pits Germany's top clubs together after Bayern held off a spirited Dortmund challenge to land a seventh straight league title on the final day of last season.

"This is the first title that is important to us," said Bayern star Thomas Mueller a fortnight before the new Bundesliga season starts.

"The game has a certain explosiveness. We want to show that we are ready -- we'll put our all into it."

As defender Niklas Suele put it, Bayern "want to give a sign" they remain the team to beat in Germany.

Dortmund have recruited hard, signing wingers Thorgan Hazard and Julian Brandt -- the latter currently sidelined by injury -- and luring Mats Hummels back from Bayern to beef up the defence.

Potential club record
According to reports, Bayern have tabled a bid of around 90 million euros ($85 million) -- which would be a club record.

They have even reportedly pushed taking the official team photo back to September in the hope the 23-year-old will have joined by then.

Head coach Niko Kovac initially declared "I assume we'll get him" last weekend, but Bayern have dramatically dialled back.

On Wednesday, Kovac insisted "what I said was true" as he still believes in the deal with the transfer window to close in a month's time.

Exactly who will line up for Bayern at Dortmund is unclear.

Bayern fielded mainly reserve team players in Wednesday's defeat to Tottenham Hotspur in the final of their pre-season tournament.

Frenchman Kingsley Coman, who suffered a recurrence of a serious ankle injury last season, "only" bruised his knee against Spurs, Bayern confirmed.

Fellow winger Serge Gnabry is also doubtful with a leg knock, but Kovac indicated both players "will be back soon".

It will be interesting to see if Jerome Boateng features after coming off the bench against Spurs and missing the crucial penalty in the shoot-out.

Bayern are keen to sell the 2014 World Cup winner, but the club's desire to move the 30-year-old on has irritated the squad.

"We've been going round in circles for weeks," moaned Mueller. "This guy Jerome Boateng does us good," he added in his team-mate's defence.

This will be Dortmund's first key test after winning six pre-season friendlies -- including a 3-2 victory over Champions League holders Liverpool last month on their US tour.

They posted a 4-1 win over St Gallen on Tuesday in their Swiss training camp with captain Marco Reus scoring their fourth.

"The Super Cup is very important for us all - to start the season well and show fans what we have planned," said Reus.

"However, it's clear neither us nor Bayern are at 100 percent yet."