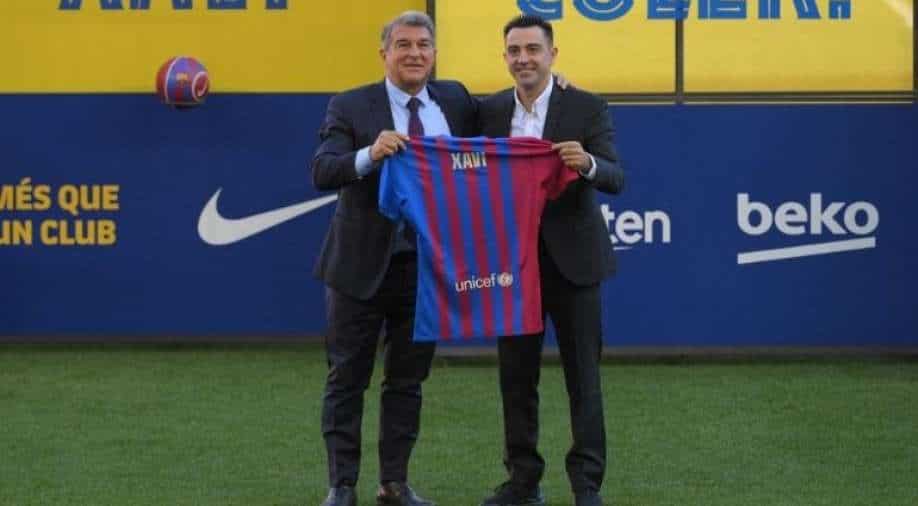 Barcelona have appointed former midfielder and captain Xavi Hernandez as the club's new head coach till 2024.

Barcelona presented Xavi Hernandez as their new head coach in front of thousands of fans at the Camp Nou on Monday.

The 41-year-old Barca great signed his contract, which runs until 2024, on the pitch alongside club president Joan Laporta.

"It`s a historical day for Barcelona. Welcome, Xavi," an emotional Laporta told the supporters during the ceremony where the ex-midfielder was accompanied by his family.

"Thank you all. I don't want to get emotional but I am, I feel goosebumps," Xavi told the fans.

ALSO READ: Moving on from Messi to top-four finish: Issues that Xavi will have to address at Barcelona

"This is the biggest club in the world and I`m going to work hard to reach your expectations. Barcelona can`t accept a draw or a defeat. We have to win all the games."

Xavi joined after Barca paid his release clause with Qatari club Al-Sadd. He will replace the sacked Ronald Koeman.

"I come prepared. My DNA didn`t change. We need to take charge, have the ball, create opportunities, be intense. We have a mission to rescue many things that were lost," Xavi said.

After the presentation Xavi talked about how discipline will be a major factor in his project as Barcelona manager.

"We have to start with new rules that are going to be strict. It`s not a matter of being tough, it`s about having norms," he told reporters.

"When we had norms in the locker room things were good, when we didn`t, it went bad. So, we need to have order. Being professionals.

"It`s a medium to long-term project but we`ll need to work really hard to find the results. The expectation and the demand will be the highest. No excuses will be made or accepted."