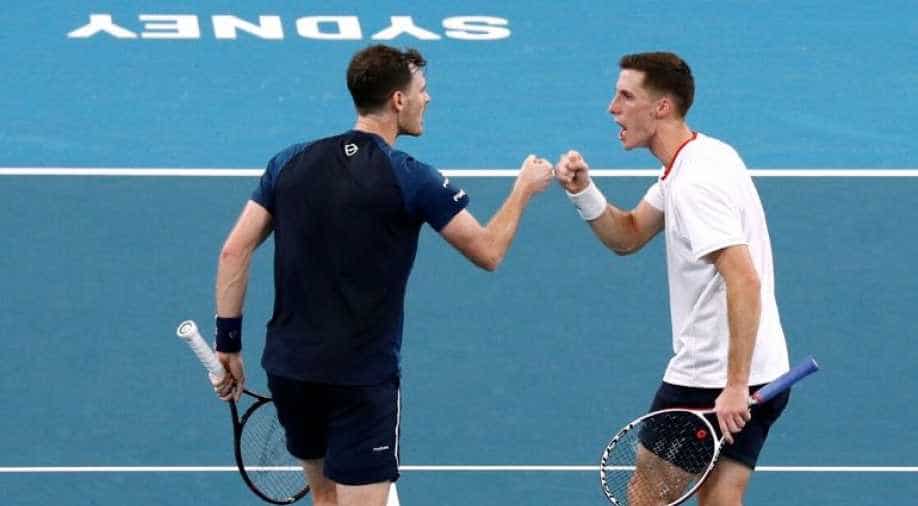 In something resembling both a hug and a wrestle, De Minaur and Kyrgios fell to the ground in a celebratory embrace after edging the half-hour-long extended tiebreak, used in place of a deciding third set

The Australian duo, better known for their singles play, defeated doubles specialists Jamie Murray and Joe Salisbury 3-6 6-3 18-16 to set up a semi-final against either Rafael Nadal-led Spain or David Goffin's Belgium.

In something resembling both a hug and a wrestle, De Minaur and Kyrgios fell to the ground in a celebratory embrace after edging the half-hour-long extended tiebreak, used in place of a deciding third set.

"That was the most stressful tie-breaker I've ever been involved in," Kyrgios said in an on-court interview after the match. "I'll definitely be having a couple of red wines tonight."

The pair were subbed in by team captain Lleyton Hewitt at the last moment after the teams split the two singles matches, a decision he attributed to Kyrgios' irresistible form.

While Kyrgios' on-court behaviour often raised hackles, few handle pressure moments as well as he did on Thursday. Facing a match point in the doubles tiebreak, he ripped a backhand winner off a serve down a narrow gap.

Kyrgios said after his comfortable victory that he wasn't happy with his serving rhythm, although he did successfully use an underarm serve that appeared to confuse his British opponent, who was looking out for the tactic to be redeployed throughout the match.

"Anytime is a match where the opponent stops thinking about what he needs to do ...I think I have an edge straight away," said Kyrgios.

Krygios has previously employed the obscure but long-used tactic, notably against Nadal, the world's top player, who has criticised the Australian's on-court behaviour.

"If it gets in Rafa's head, then it's a success," Kyrgios said after Thursday's match.

De Minaur and Evans split the opening sets, setting up a third set contest that went to a tiebreak. Britain's top player used his all-court game to press his younger opponent and successfully employed serve-and-volley tactics at key moments.

Hewitt then made the prescient call to put the 20-year-old immediately back out on court, partnered with Kyrgios, instead of doubles specialists.

"You have five minutes to decide after the second singles," said Hewitt, who added that Kyrgios' form was too good to leave him out of the deciding match.