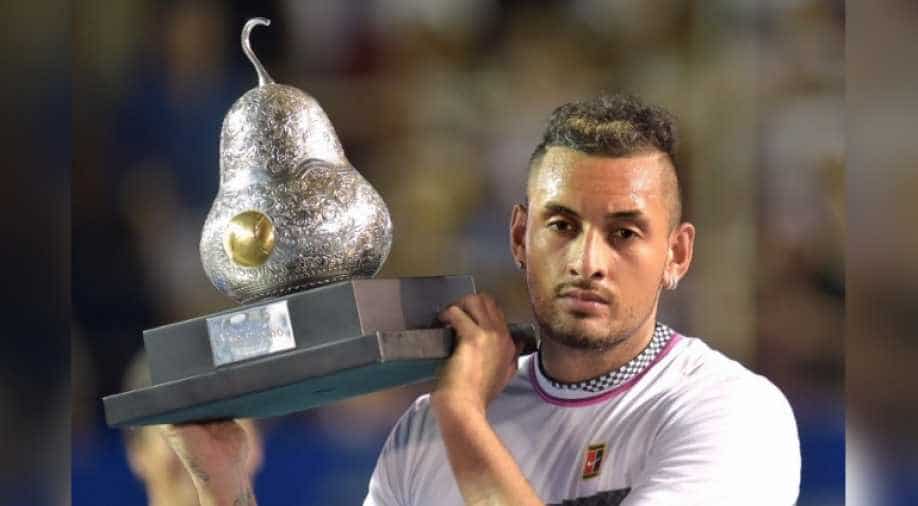 Kyrgios converted three of his break point opportunities and sealed the win on his first championship point with a massive serve that was too much for world number three Zverev to handle.

Nick Kyrgios saved his best performance of a brilliant week for last as the Australian stunned second seed Alexander Zverev 6-3, 6-4 to win the Acapulco International in Mexico on Saturday (March 2) for his fifth career ATP title.

The temperamental Aussie, whose scintillating run to the final included wins over multiple grand slam winners Stan Wawrinka and Rafa Nadal, played free and focused from the outset and frustrated German Zverev with a steady diet of drop shots.

Former world number 13 Kyrgios, who has fallen to 72 in the rankings, converted three of his break point opportunities and sealed the win on his first championship point with a massive serve that was too much for world number three Zverev to handle.

After a week in which he fired back at Nadal for criticising his behaviour on the court, Kyrgios was full of compliments for Zverev, 21, after being presented with the championship silver pear trophy and a black sombrero.

"You're tame, you're so professional, you're an example to any tennis player and I think I can take a leaf out of your book and maybe I can catch you on some titles one day," said Kyrgios.

The 23-year-old Australian struck first and emphatically when he broke at love in the fourth game of the opening set and consolidated the break to go ahead 4-1, triggering a frustrated Zverev to smash his racquet beyond repair on the hard court.

Kyrgios opened the second set with a break but then looked like he may start to crack when he found himself staring down a break point in the next game and double-faulted, allowing Zverev to draw level at 1-1.

But Kyrgios' nerves held up and he broke again in the fifth game and then held steady the rest of the way as he collected his first tournament win since Brisbane in January 2018.

Zverev, competing in only his second tournament of the year after crashing out of the fourth round of the Australian Open, arrived in the final in solid form having not dropped a set all week but had no answer for Kyrgios.

With the win, Kyrgios improved to 4-3 in career head-to-head meetings against Zverev.