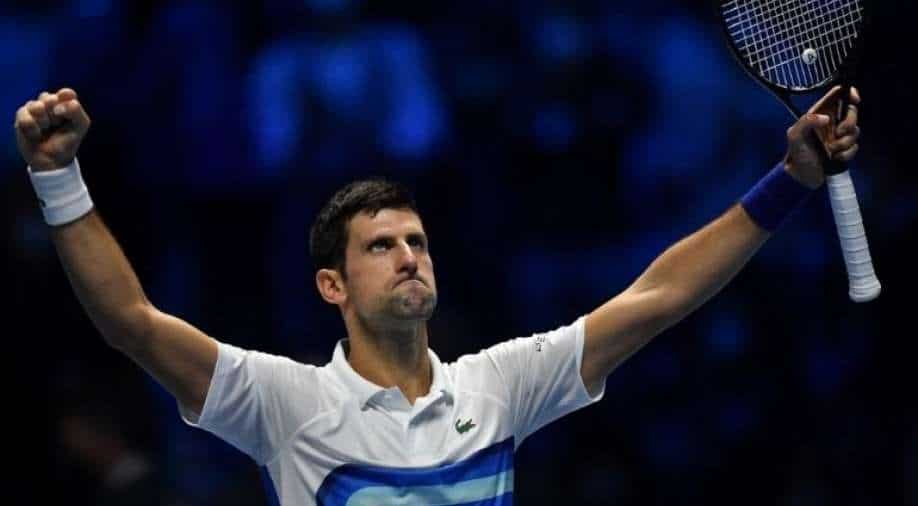 Serbia's Novak Djokovic celebrates after defeating Russia's Andrey Rublev during their first round singles match of the ATP Finals at the Pala Alpitour venue in Turin on November 17, 2021. Photograph:( AFP )

Novak Djokovic tops the Green Group standings with two wins from two and is assured of a place in the last-four.

Novak Djokovic claimed a spot in the last four of the ATP Finals with a 6-3 6-2 victory over Russian Andrey Rublev on Wednesday, while Stefanos Tsitsipas withdrew from the tournament due to an elbow injury.

The ATP said that the Greek world number four had suffered a right elbow injury, something he had been carrying since retiring from the Paris Masters earlier this month, and would be replaced in Turin by British world number 12 Cameron Norrie.

Djokovic, who won his opener against Casper Ruud on Monday, looked to be in trouble from the off in his first ever match against Rublev when he was broken in the first game.

The Serb, looking for his sixth title at the season-ending event, was given an immediate reprieve when Rublev double faulted in his own service game to bring up two break points, the second of which went for Djokovic.

The pair were on an even keel until the eighth game when Djokovic pounced on a heavy volley from Rublev and sent a winning pass beyond the Russian to claim the vital break on his way to claiming the first set.

The second was more assured from the world number one, forcing his opponent into some costly errors that helped bring up Djokovic's 40th win at the ATP Finals in 68 minutes, sealed with an ace.

The 34-year-old and 20-times Grand Slam winner tops the Green Group standings with two wins from two and is assured of a place in the last-four.

Norrie will make his debut in the tournament later on Wednesday against Norway's Ruud.