Ashes 2021-22: Hapless England bundled out for 185 as Australia continue domination in 3rd Test 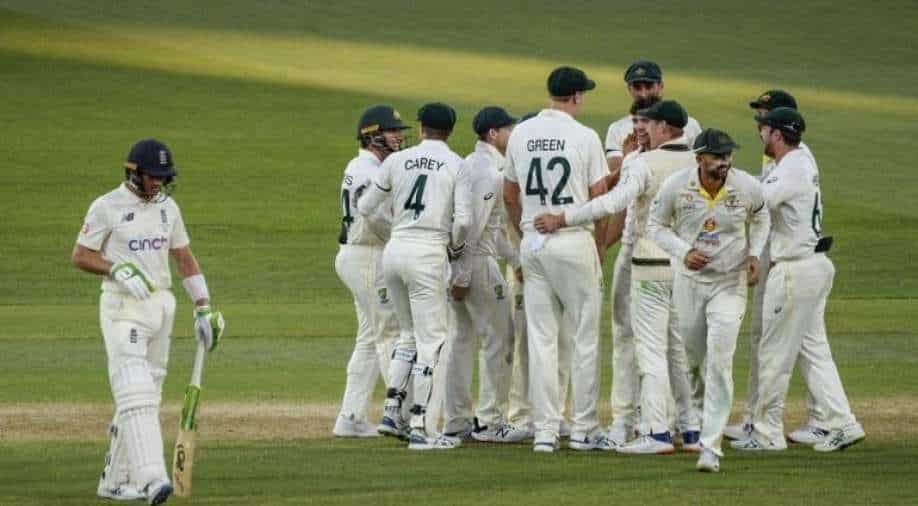 England bundled out for 185 as Australia continue domination in 3rd Test Photograph:( AFP )

After heavy defeats in Brisbane and Adelaide, the visitors must win in Melbourne to keep the five-Test series alive, with Australia only needing a draw to retain the urn as holders.

England crashed to 185 all out on day one of the third Test on Sunday, leaving their Ashes dreams on the brink of ruin in the face of a relentless Australian attack.

After heavy defeats in Brisbane and Adelaide, the visitors must win in Melbourne to keep the five-Test series alive, with Australia only needing a draw to retain the urn as holders.

But those hopes took a near-fatal blow as Australia ripped through England's flimsy batting, with only captain Joe Root (50) and Jonny Bairstow (35) showing resistance.

Australian skipper Pat Cummins, back after missing the second Adelaide Test because he was in Covid isolation, and spin king Nathan Lyon both took 3-36.

Australia then added to England's pain by negotiating 16 overs to be 61 for one at stumps, trailing by only 124 with Marcus Harris not-out 20 despite taking a nasty blow to the finger, and nightwatchman Lyon yet to score.

But on another bad day for England they did bag the big wicket of David Warner, who raced to 38 off 42 balls before sending a thick edge off Jimmy Anderson to Zak Crawley at gully.

After batting collapses and poor bowling in the first two Tests, Root read his players the riot act -- seemingly to little affect. They have failed to score more than 297 in five innings so far.

Openers Haseeb Hameed (0) and Crawley (12) fell cheaply to Cummins after he won the toss and put England in to bat, with their hopes resting once more on Root in front of 57,100 fans at the MCG -- less than expected due to Covid concerns.

He brought up his 53rd Test half-century in his 112th match, but once more failed to convert it into a maiden ton in Australia after a poor shot on 50 to Mitchell Starc.

The visitors wielded the axe after their 275-run defeat in Adelaide with Crawley in for Rory Burns and Bairstow replacing Ollie Pope at number six.

Speedster Mark Wood was recalled after being rested in Adelaide, as was off-spinner Jack Leach, with Chris Woakes and Stuart Broad overlooked.

Crawley earned his first Test chance since March due to Burns' poor form, but he failed to grab it, finding an outside edge to a rising Cummins ball that Cameron Green superbly caught at gully.

His dismissal for 12 left England at 13 for two with Dawid Malan and Root, the only two English batsmen to pass 50 this series, again on the back foot.

A cautious Malan took 18 balls to get off the mark, but disaster struck just before lunch when he got an edge off Cummins on 14 that carried to Warner at slip.

Root played positively to move past South Africa's Graeme Smith (1,656 in 2008) and into third place for the most runs scored in a calendar year.

But just as he looked set he offered a lazy stroke that took a nick and was taken by Carey, with the England captain livid as he trudged off.

After star all-rounder Ben Stokes departed for 25, succumbing to pressure from Green and playing a cut shot straight to Lyon at point, Jos Buttler lasted only 11 balls.

He hit Lyon to debutant Scott Boland, the first Indigenous man to play Test cricket for Australia since Jason Gillespie.

Boland then took the wicket of Wood, lbw for six, before Bairstow gloved Starc to Green and Australia mopped up the tail.