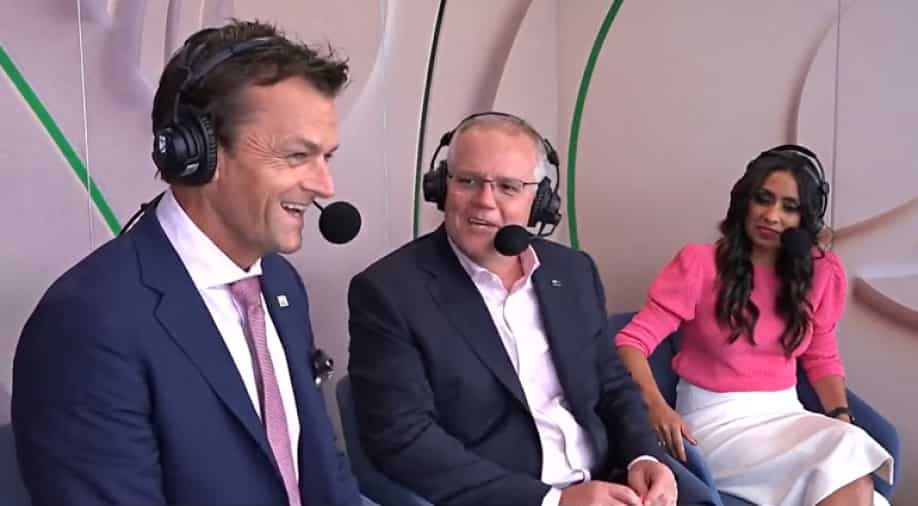 Amid raging controversy over tennis superstar Novak Djokovic's detention in Australia, Aussie PM Scott Morrison was seen commentating during the ongoing 4th Ashes Test between the hosts and England.

Australian Prime Minister Scott Morrison turned commentator during the third day's play of the ongoing fourth Ashes Test between Australia and England at the Sydney Cricket Ground in Sydney on Friday (January 07). Morrison was spotted in the commentary box with the likes of former Australian cricketer Adam Gilchrist and former England cricketer Isa Guha.

Morrison's surprise presence at the commentary box during the 4th Ashes Test hasn't gone down well with some fans of tennis star Novak Djokovic. Amid raging controversy over Djokovic's detention in Melbourne, Morrison's actions have invited criticism yet again on social media.

World no.1 Djokovic's visa was cancelled upon his arrival in Australia on Thursday ahead of the Australian Open tournament. Djokovic had announced he was heading Down Under to defend his Australian Open title after being granted a medical exemption as he had refused to reveal his COVID-19 vaccination status.

However, the strict COVID-19 guidelines and the vaccination rules in Australia meant the tennis star was detained. It is not known on what grounds was Djokovic handed a medical exemption as the tennis star prepares to fight a legal battle in Australia.

The Australian government had earlier stressed that the players taking part in the Australian Open should all be double vaccinated as the country continues to deal with rapid surging cases of COVID-19 and lockdowns across the nation.

Why was Scott Morrison in the commentary box during the 4th Ashes Test?

Morrison graced the commentary box on Day 3 of the 4th Ashes Test between England and Australia to lend his support towards the McGrath Foundation - an initiative by former Australian fast bowler Glenn McGrath which works for breast cancer patients in the country.

@ScottMorrisonMP is at the SCG supporting the @McGrathFdn.

Head to https://t.co/geoxwH1rDr to find out how you can support them too! pic.twitter.com/YfDjdHj2sS

The ongoing 4th Ashes Test between Australia and England is a Pink Test which aims at raising funds for the McGrath Foundation to support its initiative towards breast cancer patients.